“We’re Cooking Up New Tracks” – An Exclusive Interview With Tyde 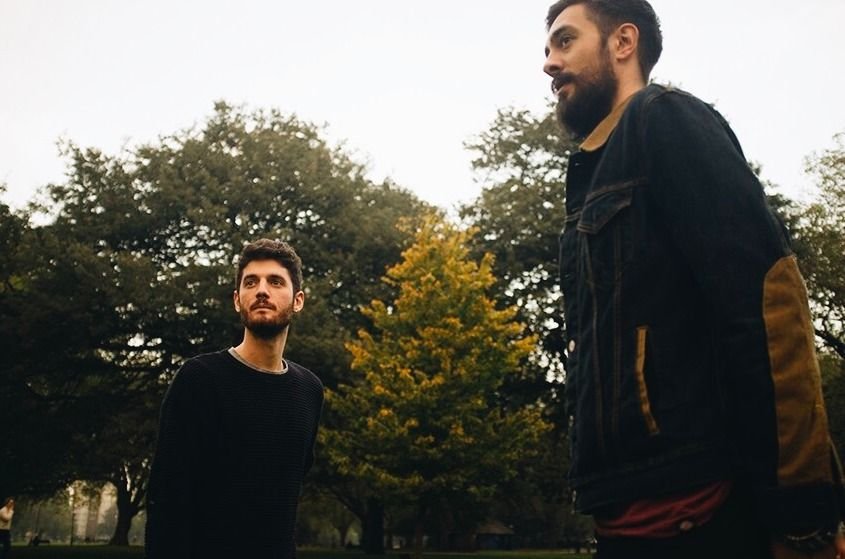 We recently enjoyed a ‘mini-heatwave’ in the UK, but if only there was a group who produced summer-worthy chill house music even when it’s cold and wet. Well, we’re happy to inform you that the debut EP ‘Mosaic’ from London duo, Tyde, is exactly what you need in your life to prolong that heatwave.

Tyde featured on Bastille’s ‘VS (Other People’s Heartache, Part 3)’ mixtape on the song, ‘Axe to Grind’ and now their four-track EP, ‘Mosaic’, is available on Mineral Records.

When the link to Tyde’s debut EP, ‘Mosaic’, was tweeted about by numerous musicians on my timeline/feed, I had to check it out and I was very impressed. Their music is simultaneously energetic and relaxing, stimulating and calming. I really like the energy of their sound which makes me long for summer.

There are 4 tracks on the EP: Don’t Worry, Down, You Again, Can’t Help It. Each song was recorded in a different location and therefore each one has a very individualistic sound, yet they still connect.

Tyde is making music that is unique yet distinctive.

‘You Again’ is my favourite track from ‘Mosaic’ because the beats just hook you in and you can forget the world for those 3 minutes and 45 seconds.

We spoke to Nick and Kyle about their influences (musical and otherwise) and why their sound is the musical equivalent of a mosaic.

How long have you been making music together?
We’ve been at it for quite a while. It started as a bit of fun about 4 years ago, we picked up a few remixes and just really enjoyed it so carried it on. We did do a track for the Bastille mixtape. We sent over a few beats to Dan [Smith] and he was into that one and ran with it with Rationale.

How do you originally know each other?
We’ve known each other since secondary school. Kyle was originally mates with my brother then we got quite tight.

What is your working relationship like? For example, do you usually agree on things or is it more a process of talking ideas through? Has there ever been a Tyde fist fight? And if so, what was the outcome?
No fist fights yet although pretty obvious what would happen if there ever was one…We don’t agree on everything but we tend to try and be diplomatic. We’ve become better at letting go of things that aren’t necessarily best for whatever we’re working on at the time.

Where does the name ‘Tyde’ come from? And why the title ‘Mosaic’ for the EP?
The name Tyde came from [when we were] making some lunch in Nick’s mum’s kitchen and Kyle tried to read that famous WWII ‘We Can Do It’ poster she had up backwards. He did it wrong anyway but the TIOD thing stuck because we liked the sound. No idea why we used a Y though.

Can you tell me more about ‘Mosaic’?
We usually get together at Nick’s house to work on stuff. Nick has had a bit of a varied few years with housing shall we say. Each of the four songs were all actually made in different London locations (Haggerston, Whitechapel, Brockley and Shepherds Bush) which I guess inevitably influenced how they sound.

The ‘Cold Blood’ (Tyde remix) has just been released. How did you come to work with Bruno Major?
He’s a good friend of Kyle’s and when he heard we were putting the EP together he graciously let us take ‘Cold Blood’ apart.

Which artists/tracks/albums have you been listening to lately?
Loving the new SG Lewis album. There’s also a guy called Kiefer who’s been a recent obsession.

Are there any other collaborations/remixes in the pipeline?
Nothing that we can talk about just yet…

Are you currently making new music? Is there anything you can tell us about it?
We’re currently cooking up lots of new tracks so a lot of vocalists are soon to get spammed and irritated by us.

Are there any live shows planned?
We are talking with a few people and planning some sets in London soon.

Kyle [Simmons] is also a member of Bastille, but this isn’t something you have mentioned when promoting Tyde. Was that a conscious decision?
It’s never something we’ve wanted to keep secret but equally, we’ve never promoted it as they are two very different things sonically and feel Tyde should walk its own path.

What influences your music?
Trying to go to sleep.

Finally, did the noisy construction workers outside your studio ever leave?!
They’re still very much at it…Nick has moved house again though so I guess a new EP is underway.