The Enchanting Voice of Nikhil At His Headline London Show 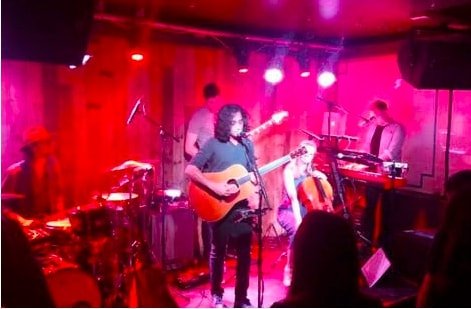 Nikhil had his first London headline gig of 2018 at The Waiting Room on May 21st opened by the new talented acoustic singer-songwriter Alex Hulme.

Nikhil is a singer-songwriter and guitarist born in Mumbai, India, in 1981.  He was working as a geologist when he decided to follow his passion for music. Nikhil started his career as a playback singer for many Bollywood & Tollywood films then won the televised South-Asian talent contest SUTASI in 2009. He played at India’s top festivals including the NH7 Weekender and The Times Lit Fest and in 2014 spoke for TEDxSIBM Bangalore.

His music is a mix of Pop, Alternative Rock and Folk, influenced by Jeff Buckley. The songwriter released two songs in 2017, ‘Beautiful Mind’ and ‘Still In Love’, then in March this year he announced his new single ‘Silver And Gold’ produced by Jonathan Quarmby through East-West Records of Warner Music UK and co-written by Nikhil, Quarmbyand Jeff Cohen. ‘Silver And Gold’ is the first single off his upcoming album while a second single will be released in late May. The official music video of Nikhil’s ‘Silver and Gold’ was shot in his hometown of Mumbai in a fantastic characteristic palace.

On the track, Nikhil says: “During early writing sessions, I had a conversation about how relationships these days don’t seem to last. It’s like people get together then due to other options it becomes a matter of convenience. It’s easy to end that relationship. But silver & gold signifies staying together and you have to really put an effort into it, It actually comes from the colour of hair. It also refers to the change of colouring your hair as you age and staying together through all of that”.

Nikhil’s gig was intimate and also amusing. He was accompanied by a drummer, a bassist, a keyboard player and a cellist. The place was not too big and people were almost lost in a trance, enchanted by his voice which creates a fantastic atmosphere. He showed also a great stage presence and a good sense of humour which made everyone laugh. I really enjoyed the gig and the cello reminded me of Indian sounds and Nikhil’s songs made me feel optimistic.

The songwriter announced that, after many travels to and from Mumbai, he is going to stay in London for a long time. The UK live dates are to be announced shortly, but for the moment go and listen to his enchanted voice on Spotify!