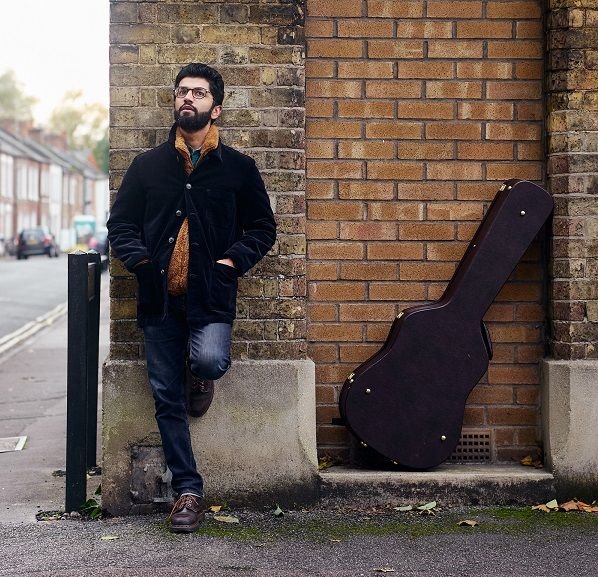 “I wanted to share the experience of people from our community.”

‘All at Sea’ is the stunning new EP from talented singer-songwriter Riaz Ahmad. It’s the perfect tonic for a long week with its soothing sounds and tranquil instrumentals. The 4-track project is about personal subjects such as love, migration, and family. It reaches deep into your soul with its intricate blend of mandolin and sitar-based folk, beautiful arrangements and poignant lyrics.

Riaz had a successful 2019 – he opened for Jack Clarty on his UK tour and was championed by BBC Introducing Oxford and BBC Asian Network. He is known for his live performances and warms the room with his soft vocals and interesting sound which takes influences from the likes of Bon Iver and Moses Sumney.

We caught up with Riaz just before his new EP release.

Can you tell me about your new EP ‘All at Sea’?
It’s a 4-track EP and I wanted each of the four songs to tell a story from start to finish and for the vocals to be prominent so that the story would be easy to follow. Modern contemporary music is so much focused on creating an interesting soundscape, so I feel that the storytelling aspect has been pushed to the side. I also wanted it to sound authentic to me, like an English singer.

How would you describe your sound to new listeners?
The songs are sonically really different, but I think what unites them is guitar and vocal because those are my two main instruments and the starting point for my songwriting. There are lots of vocal harmonies dotted around and I also experimented a lot in the studio to create interesting sounds. I love hearing music where each listen reveals a sound that you didn’t pick up on previously and that’s the beauty of being in the studio.

How much do your culture, heritage, and personal experiences influence your music?
A lot. The song ‘Pray to God’ is a tribute to women of my mother’s generation who came to the UK from South Asia in the 60s and 70s, had arranged marriages and were devoted to raising their kids. Being British-Pakistani I grew up watching films like Bhaji on the Beach and East is East in the 90s and feeling like British Asians were finally being seen and appreciated. With that song, in particular, I wanted to share the experience of people from our community.

Who were your musical influences growing up?
I grew up listening to grunge and west coast gangster rap and I don’t know think you hear much of that in my music! I’ve always been drawn to singers, in any genre, so I loved Jeff Buckley, Lauryn Hill, D’Angelo…singers whose voice really moved you.

Probably the biggest influence was just growing up in a time when you would listen to whole albums on repeat. I think that the wealth of choice available to us makes it difficult to properly tune in to things.

What do you find are the biggest challenges being a music artist in this day and age?
Being heard! Music-making is so cheap nowadays and social media has broken the barriers between listener and musician, which give us so much choice. But at the same time, it’s difficult for any individual artist to get heard.

If you weren’t making music what else would you be doing?
Chef!

Favourite venues to perform in and why?
I’ve played at the Sheldonian Theatre in Oxford a couple of times, which is a beautiful and historic space. It’s been a long time since I’ve done it, but busking was always uniquely enjoyable because no-one is there to see you, but you can grab people’s attention against their wishes!

What’s next for Riaz Ahmad?
The EP launches on Feb 21st, with some live dates and I’m starting work on the second one after that. So the cycle continues!