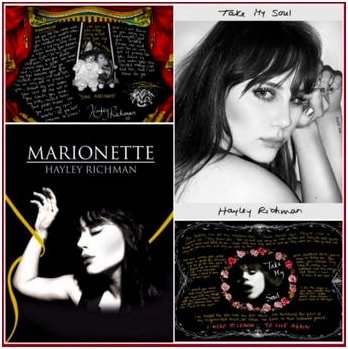 Hayley Richman began her singing career by uploading covers of her favourite songs to YouTube. Quickly becoming known for her Radiohead covers, her huge social media presence has earned her much interest. Hayley has developed a large following via social media with over 10 million views and nearly 75k subscribers on the aforementioned YouTube alone. Two of her singles, ‘Take My Soul’ and ‘Marionette’ have recently been remixed and mastered for a debut vinyl release (pressed by Third Man Pressing). Now collaborating with new New York record label SoundEvolution Music, the future is very bright for this talented young artist.

‘Take My Soul’ has a dark and ominous intro which leads to a song with ethereal orchestral accents above which Hayley Richman’s angelic vocals soar. Distorted instrumentals underpin a very cinematic piece with gut-wrenching longing from the intertwining harmonies. What starts out as one thing ends up as something completely different. With layers and layers of haunting textures and tones, lush strings, a heart beating bassline and amplified vocals; the way this song has been put together is very clever. It leaves you breathless and craving more at the same time.

So thank god for ‘Marionette’. Hayley Richman has certainly crafted a signature sound blurring the lines between dark indie and rock stitched with transcendent melodies, haunting vocals and weaving multi-harmonies. Her music might not be the most uplifting, but it’s certainly the most thought-provoking with an alluring depth.

Not just a musician, Hayley has designed all of the artwork for the jacket and insert which is great for her fans who love her artwork almost as much as they love her music.

Neon Music delved into the mind of the female Radiohead, Hayley Richman, to find out more about her distinctive, alluring sound, her obsession with true crime stories and how she winds down with a bit of Idris Elba.

Tell me about Hayley Richman?
I’m an 18-year-old singer living in Canada. Most of what I do is social media based and I run a YouTube channel with over 75,000 followers whom with I share my covers and original songs.

How would you describe your sound to new listeners?
I guess I would describe it as haunting and melancholic with a sort of underlying intensity and heaviness. I like using the term Sadcore to title it as well.

What is your earliest musical memory?
My dad breathes music so I grew up with it from day one. He played a record every morning from his attic and it would echo through the rest of the house while we were waking up. That’s one of the big ones for me, and just him playing the guitar constantly.

Your father has been a huge influence in your career – how do you work together?
He plays and programs all the instruments for our covers and originals. The process for the originals is different each time, but it’s always a collaborative one and involves a lot of back and forth until we come up with something we like enough to release.

Tell me about your songs ‘Take My Soul’ and ‘Marionette’?
Take My Soul (2013) and Marionette (2014) are actually older songs of mine but were recently remixed and mastered for a vinyl release. I was so happy to breathe new life into these songs and promote them in a different way as I think they’re some of the best ones we’ve done so far!

Your music has an intense, cinematic quality. What inspires you and how do you go about writing?
Thank you! I love that you described it that way, I’m definitely inspired by other music with a cinematic feel as I love incorporating strings/orchestra in my songs. My dad either comes up with an instrumental that we collaboratively lay down some of my vocals on top of or other times I send him a demo I’ve made and he polishes and reworks it. It’s definitely a different process each time and has changed a lot over the years.

What has surprised you most about being in the music industry?
Probably just how many people have actually wanted to listen to my stuff or collaborate with me in some way. I’m shocked at the level of support I’ve received and the power of social media in the business today.

What are the biggest challenges?
It’s really hard to put yourself out there. I struggle a lot with being open and fearless on social media – being extroverted isn’t that easy for me in general and self-promotion almost always feels a little awkward. That paired with the insecurity and self-doubt that many artists deal with have definitely been the hardest parts so far.

How much has social media changed your life?
It’s the reason I’ve achieved anything at all in music. I owe everything to YouTube and the people who have found me through it! It’s definitely a blessing for upcoming artists and totally facilitates finding a community of fans and collaborators.

Is there a lyric or track that is particularly meaningful to you and why? (your own music)
I love the lyrics to ‘Marionette’ because it’s written entirely in metaphors and all the lines fit with each other thematically. “I Can Spin On Your Stage / Spring To Life From Your Cage / No Fear Nor Regret, Your Marionette.”

Who are the artists that inspired you while growing up?
When I was 12 or 13 I got really into Radiohead and that was one of the first bands I got so obsessed with that I had to find everything they’d ever touched. I definitely kept listening to them for years through high school and they remain one of my favourite bands. Otherwise I loved Jeff Buckley, U2 and Fiona Apple.

What is influencing you at the moment?
Well musically I’ve been really into exploring stuff from the 60s-70s and that whole culture. I also get really inspired by artwork and movies; right now it’s been a lot of old animated films and comic book artists.

Who is on your playlist at the moment?
The new Lana Del Rey record just came out so I’ve been sorta hooked on that, otherwise I’ve been listening to a lot of Blue Öyster Cult & The Moody Blues. ‘Goodbye Jumbo’ by World Party is a great record as well.

Describe a typical day for Hayley Richman?
Since it’s summer I’ve been out a lot more than I usually am, but I’ll generally spend part of my day with friends and the other part doing music-related things: working on new original demos from my little basement lab, social media maintenance, planning my next videos, etc.

Is there a song that changed your life? And why?
There are so many but I related to ‘Fake Plastic Trees’ by Radiohead in a really special way when I first heard it. I felt like I really knew where he was coming from – I just remember thinking it was such a powerful lyric and the music was perfect too. It was definitely my favourite song for a long time.

Dream collaboration?
U2 would be one for sure. The collaboration they did with Lykke Li on their last album was amazing, totally wish I’d been on that.

Dream venues / cities  to perform at?
New York City is my favourite place in the world, so playing at any of the iconic venues there would be a big dream for me.

If you weren’t in music, what do you think you would be doing?
I’m a visual artist as well so I might be doing something related to graphic design, illustration or tattooing.

What do you enjoy doing to wind down?
Lying with the lights off and listening to a record with headphones, watching old 2D animated films or unloading everything into pages and pages of journal paper.

Favourite Netflix show?
Most of the stuff I watch isn’t on Netflix but of the ones that are, “Luther” is pretty good (Ruth Wilson is great). Otherwise, I recommend “The Night Of” to everyone.

Tell me something people don’t know about you?
I’m pretty morbid and completely obsessed with true crime stories. I can spend hours researching them cause I find the psychology behind it fascinating.

What’s next for Hayley Richman?
I just released a 7” vinyl record of two remastered original songs which I’m really excited about. It’s currently on pre-sale at SoundEvolution and they’ll be shipping out in August. Otherwise, been writing a lot of new original songs and am hoping to release them as soon as possible!