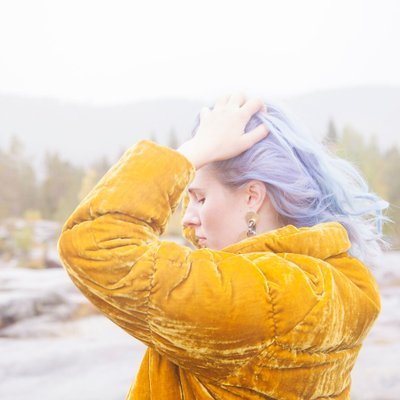 We love a good debut and when you listen to ‘When You Leave’ from Young Tiger and it’s that good, you wonder how they could possibly top it in the future. The song reels you in instantly and exudes such warmth you’ll feel like you’re basking on a beach in Barbados. So who is the mysterious Young Tiger? The Copenhagen-based duo, otherwise known as Emma and Rasmus, met during a Jazz music programme and formed Young Tiger in a New York loft last Autumn. They collaborated with the Danish producer Simon Littauer and British songwriter Wolfie on their exciting debut single.

‘When You Leave’ is impossibly dreamy with pearlescent electronic textures, hooks which swell like balloons and an expansive sonic template. Despite this and Emma’s ethereal vocals and melodic harmonies (and the visuals portray this spacious feeling exquisitely), the song manages to sound intimate. The accompanying music video is painted with vibrant spring pastel colours and the beautiful Scandinavian scenery elevates the soothing, mellow feeling of the track.

Emma and Rasmus tell us more about the beginning of their musical journey as Young Tiger. Take it away:

Rasmus: It’s no secret that we are from Scandinavia, and at the moment the Scandinavian music/art scene is lit! The whole idea of filming the music video in Luleå, North-Sweden, was to emphasize the Nordic feel with the raw nature and cold light. The surroundings we chose are timeless and beautiful, and they fit perfectly with the escapism character of the song.

Emma: ‘When You Leave’ is about feeling like you’re finally ready to love and be loved but you’re still only pursuing it halfhearted when you’re too afraid to get hurt, so you leave before you get left. The video portrays the restless state of mind, with someone wanting to go somewhere, not quite knowing the destination or the outcome. We also wanted to give it a little sci-fi feel, to highlight the curiosity of the unknown.

How did you both come together to form Young Tiger?

Rasmus: We met during a Jazz music programme, I had mostly been playing jazz guitar and earlier punk music. When I met Emma I started producing her songs and play a lot more synthesizers, and then we slowly developed our sound song by song.

Why the name Young Tiger?

Emma: I found an old picture of me painted and dressed as a Tiger for Halloween, and then we came up with the name ‘Young Tiger’. I think there’s a good energy in the name, to me it’s kind of a post-teen/pre-adult thing but combined with the elegant Chinese historical admiration of the tiger’s beauty, power, and ferocity. So I guess putting Young before Tiger makes us more humble, haha.

How would you describe your sound?

What is inspiring you musically at the moment?

Emma: I’m listening to a lot of hip-hop these days. It’s a different genre than I’m used to, and I love investigating the lyrical universe. In general, I try to fill my playlists with a lot more hip-hop with its straightforward attitude, it’s a great influence on my Scandinavian melancholy.

Rasmus: I’m listening to a lot to Charli XCX´s album ‘Pop 2’ at the moment, I Also really love the album called ‘Boo Boo’ by Toro Y Moi. It’s all about the attitude – last week I only listened to Deep Purple for instance.

Emma: I would love to work with Thom Yorke! Or Björk.

Rasmus: I would love to spend a week in a studio with Mark Ronson, or Jack Antonoff!

Do you have any shows/festivals planned for this summer?

Not at the moment, right now we are focusing on writing and finishing songs.

Emma: my obsession with Anastacia and Cher, and my Kinder Bueno overeating.

Rasmus: I don’t have any guilty pleasures if I wanna binge-watch ‘New Girl’ I’ll do it proudly.

What’s next for Young Tiger?

We have a lot of amazing songs coming up, stay tuned!