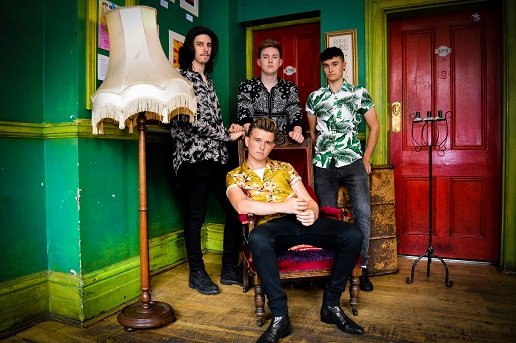 Bristol-based indie-rock act Chay Snowdon is releasing two new singles this Friday – ‘Mon Cheri’, a fast-paced track to get your heart rate up and ‘Sha La La’ a more chilled, reflective track about living fully within the moment, “living by the ethos of let’s live for tonight and deal with everything else tomorrow”.

We caught up with Chay Snowdon (vocals and rhythm guitar) and his band – Liam Roberts (lead guitar), George Roach (bass) and Ed Fox (drums) to find out more about the new releases, 2018 highlights and what they think an artist needs to do in order to succeed. And much more of course…

Tell me about your new singles ‘Mon Cheri’ and ‘Sha La La’?
‘Mon Cheri’ is about admiring someone who just goes off to travel and see the world, but also being a little bit envious that you haven’t gone along for the ride.
‘Sha La La’ is a slower song that follows two people on a night out together and having the time of their lives.

Why have you decided to release 2 singles at the same time?
We couldn’t pick between the two, ‘Sha La La’ is one I have been sat on for a while now and the timing felt right to release it. Whereas ‘Mon Cheri’ is a much newer song. As a band, we felt the two tunes complemented each other well, so we thought “why not put them both out…“.

Who or what is inspiring you musically at the moment?
I’m really into Sam Fender at the minute, his lyrics are great! I’m also loving Catfish and the Bottlemen’s new tune “Longshot” … Been a big fan of theirs for a while now.

What were your 2018 highlights?
Selling out our Christmas show was amazing, especially now as people know the words to some of the tunes. Also, playing to a fair few thousand people in Plymouth for Bonfire night … That was mental!

What do you think a music artist/band has to do these days to succeed?
I think image is a huge part of things … People judge what music you make from the way you present yourself. So having a really strong image I think helps to strengthen the whole “brand”. Of course, having a few bangers in your arsenal helps to haha!

Your favourite up and coming music artist is?
As a band we are big fans of Jordan Allen, we’ve been lucky enough to support them a few times. They always put on a great show and they’re great lads!

Top 5 tracks of 2018
In no particular order, I’d have to say …
The Hunna – Dare
Lewis Capaldi – Grace
Arctic Monkeys – Four Out of Five
Blossoms – There’s a Reason Why (I Never Returned Your Calls)
George Ezra – Hold My Girl

What would people be surprised to learn about you?
When I was about 5 years old my family and I moved to a very small village in Spain. This has had a huge impact on my writing, especially with the Spanish line in Mon Cheri.

You’re based in Bristol – what is the music scene like there and what are your favourite venues to play?
The music scene in Bristol is amazing! We’ve played Thekla quite a few times which is always great, I mean who doesn’t want to play on a boat? Also, The Louisiana is a particular favorite of ours.

Guilty pleasure?
This is a guilty pleasure that’s not so guilty, but I’m a huge Post Malone fan! In fact, I’m seeing him live in February.

What’s next for Chay Snowdon?
We plan on hitting the festival scene hard this year. We have already been confirmed for a fair few, so we can’t wait. Later in the year, I think there should be even more new music on the way, which is exciting for us.

‘Mon Cheri’ and ‘Sha La La’ will be released on Friday January 25th.