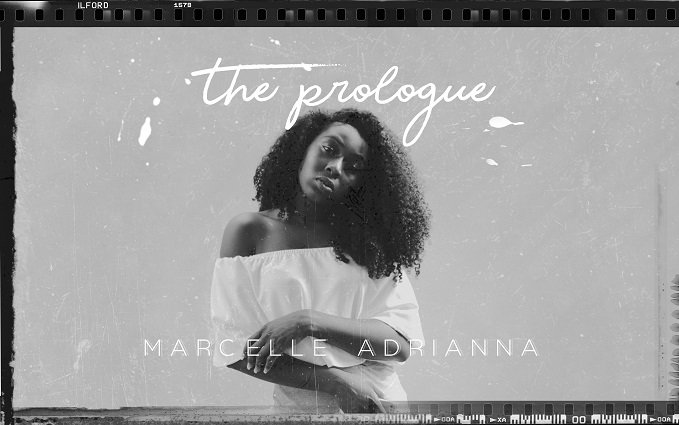 From grooving to the Jackson five, pretending to relate to ‘Irreplaceable’ by Beyoncé and moonwalking like Michael, I think it’s safe to say that we’ve all been there. Especially in the mirror. Alone. These outstanding artists gave hope to the talented Marcelle Adrianna by showing her what she could achieve but already is.

‘Prologue’ is the title of the beautifully put together EP that deserves to be heard by millions of people, and I’m not just saying that.

When it comes to our personal lives a lot of us like to keep it under wraps, not Marcelle though. Snapshots of text messages, diary entries, voicemails, voice notes, and conversations allows us to enter into marcelles life on this EP. “This EP covers a lot more ground than anything I’ve ever put out before“, she says.

Marcelle’s music didn’t always sound the same though. “I’ve grown so much. It’s astonishing to even listen to things from six months ago. I haven’t written songs for a long time so it’s something that I’m working really hard on. I know there’s so much to come from me in terms of the development of my sound. I feel like I’ve given you a very brief overview of my R&B sound.” Maybe one day we will get a full R&B album from Marcelle…I hope!

Although Marcelle may feel as if she needs to develop with her sound more, The 1975 and Melissa Steel clearly don’t think so. “The 1975 are such a fun group. The guys are great and it was so much fun performing with them. It was a surreal experience. Melissa Steel (which you may know for ‘kisses for breakfast’ and ‘I loved you‘) is a completely different type of artist so it was a lot more chill. She was lovely, we spoke about our school days and what it was like.”

Growing up with a house full of music, like living with the Jacksons, and singing in church as a child, music became more like family to Marcelle. Her passion continued as she grew up. In 2016 she quickly began to make a name of herself in the music industry. Her release debut came in 2017 with single ‘F.WU’ followed by ‘How We Do.’ Throughout 2017, she put pieces together and worked hard towards what eventually became ‘The Prologue EP’

The 1975 and Melisa Steel aren’t the only ones who have spotted this incredible talent. DJ Ace recognised Marcelle’s single ‘Fall Back’ and it was exclusively played on DJ Acres breakfast show on BBC Radio 1 Xtra.

‘Prologue’ is so well constructed; Marcelle’s talent shines as you listen to each lyric, sound, and song.

Marcelle Adrianna is releasing more visuals and singles in the future as well as live performances including a show on September 24th Upstairs at the Ritzy. She is also releasing a single this Autumn featuring a Canadian artist.