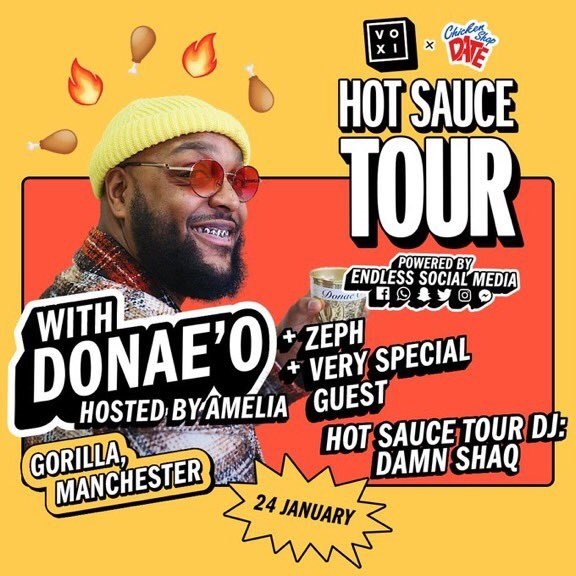 Donae’O has just arrived in Manchester ahead of his performance at Gorilla as part of VOXI’s Hot Sauce Tour. He’s a little tired at first but soon perks up when we discuss what fans can expect from the show tonight, “Expect excitement, gas, high energy” he says. And how did the collaboration come together? “Amelia (Amelia Dimoldenberg AKA YouTube phenomenon Chicken Shop Date) contacted me, I’ve done stuff with her before, a radio show and other stuff and she called me and said she’s expanding her brand and wanted me to be the first performer on the tour and I thought, yeah I’d love to do that.”
Donae’O is being supported by Zeph and DJ Damn Shaq and the Hot Sauce Tour has another two dates to be announced very soon.

Donae’O’s popular single ‘Chalice’ (featuring Belly) has been a massive hit since its release in October 2018 so I’m keen to hear how it came about, “Calvin Harris was following me on Twitter and I messaged him to say thanks for the follow and he said ‘Linguo’ (featuring Giggs) should be the song of the year. I said I’m going to be in LA next week, do you wanna come? He did and we ended up making two records and ‘Chalice’ was the second one.”

The visuals for ‘Chalice’ are certainly colourful and memorable  – did he have them in mind when creating the song? He says, “For the video, I looked at old school videos, Missy Elliot and Busta Rhymes and I wanted a video to emulate that kind of 90s feel.” Donae’O and Calvin Harris certainly had a lot of fun making the track, “The lyrics were just banter – me and Calvin were cracking jokes in the studio.”

I wonder if this is a theme in Donae’O’s music and he projects a light-hearted attitude through his songs or if there is a deeper message. He says, “some songs have a deeper meaning and others are a lot about mood – it really depends where I’m at.” I ask what’s inspiring him today and he says, “I’m inspired to be a part of something new with Amelia’s tour. She’s expanding her brand, she’s collaborating with VOXI. I’m inspired that you can start something and grow it into something else.”

What’s coming up for Donae’O? “I have an album coming out in June“. He continues, “It’s ready to go but I want to release a few singles first. ‘Chalice’ was the first single from the album.” And we can look forward to more videos between now and then too.

I’ve been checking Donae’O’s social media lately and he’s very active with lots of personal expressions and comments about what he’s up to and how he’s feeling. He admits he spends a lot of time on social media but only recently. “It’s my job so I spend a lot of time working on there. It’s weird as social media is part work and part enjoyment – you can get lost watching other people’s stuff. Lately, I’ve made a conscious decision to be more social, to go out and actually see my family and friends.” He continues, “It’s only in the last 3 months everything just clicked and started making sense. It’s about finding how to communicate with people on a social media platform. Once you find your voice on that platform then it becomes easier.”

I wonder how much life has changed for Donae’O and he says it’s been the same way since he was 16 but admits life is more intense now. “I decided to see a therapist as I knew when I signed (with a record label) I knew I would have to deal more with the level of attention.” We talk more about his therapy and how great it is for him being open as so many people can relate. “I did a post on my Instagram about it and got a massive response. I want to do a YouTube video answering questions.” 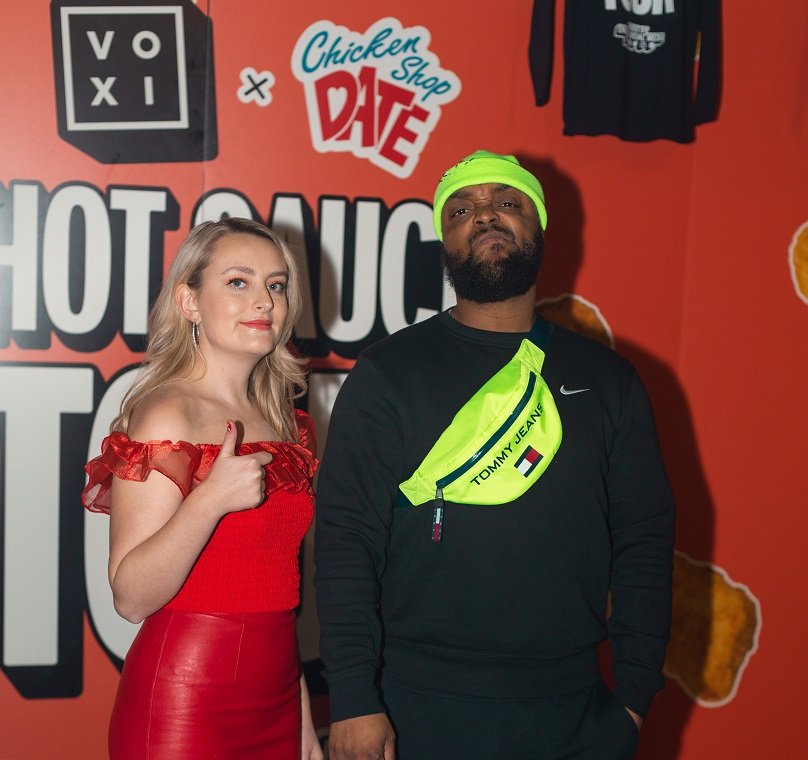 Donae’O has been in the music industry for a while and I wonder how much he thinks it has changed and if for the better. He replies, “In regards to independence and artists putting their stuff out to their audience that’s got better, but the money has got less. People don’t fully understand how to use these platforms, they are still learning. When you’re learning stuff everything is always gonna be slow – we’re still growing, people have got a hang of certain things. I believe now is the time things are really going to happen.”

And does he have any advice for artists starting out? “My advice is to get a job so you have money coming in. Then you can focus on your music. Art is supposed to inspire and enjoy and if you’re worried about making money, you’re not going to be fully creative or give your audience value.”

As our interview comes to an end, Donae’O comments, “Someone messaged me just today that they get extreme anxiety but my songs help them get up in the morning.” He continues, “I struggle from that too sometimes. I make music to make myself happy but then I like making other people happy.”

Donae’O’s single ‘Chalice‘ is out now.

VOXI, the mobile youth brand from Vodafone offers plans let you use selected social apps2 and websites as much as you like, without eating into your general data allowance. These apps are Facebook & Facebook Messenger, Instagram, WhatsApp, Pinterest, Snapchat, Twitter and Vyber. Customers also have unlimited calls and texts along with free roaming in 48 European destinations at no extra cost. VOXI SIM only plans work on a flexible monthly subscription with no contract; you’re free to change, pause or cancel your plan whenever you like.