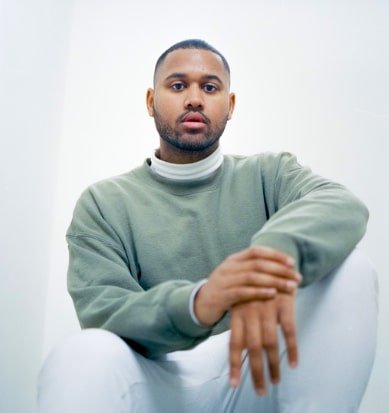 We are impressed, not just by the visuals and Latir’s sensual voice, but at how interesting and boldly psychedelic the sound of music producer Luvianis on the track. The chord structure is performed via trippy, wavy synthesisers, alongside a rhythmically unusual hip-hop beat further to the overuse of hard-hitting kicks, percussion, and hi-hats, with a deep bassline, which gives off a 90’s house influence.

Overall, the production keeps things at a minimal so that you cannot escape the slight huskiness on Latir’s vocals just before the poetry section drops, after the second verse, with beautifully honest words:

“like a flower stuck to a wall, I felt out of place too”

And let’s not forget those eccentric BV’s, which fuse the smooth with unpredictable “woop” high notes.

As for the music video which begins with an awkwardly comedic intro involving a presenter who, whilst introducing Latir on her mic, asks the singer to tell the viewers a bit about what he will performing for them. His response is just one word – “wallflower“. Latir, visually, sets the lyrical content of the song cleverly by letting all viewers know that the meaning of the word “wallflower” is as follows: “a shy or excluded person”.

Sit back and enjoy one of the most expressive performers we have observed for a long time. Latir‘s persona is both, undeniably, endearing and attractive, as he throws shapes alongside his female backing singers, who eventually join in the fun too.