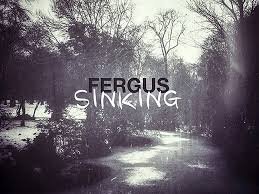 Let the latest single from FERGUS swallow you up with his melancholic music and distinctive emotive vocals. ‘Sinking’ conjures up many feelings when you listen to it, it has a powerful effect from the cinematic production, orchestral elements, and stunning harmonies. And of course the lyrics:

When the song ends you are pretty much lost for words and just want to replay it again to see if there is anything you missed the first time. ‘Sinking’ which was Produced by Jake Gosling (Ed Sheeran, Lady Gaga, The Libertines) follows FERGUS’s debut ‘You Or Nothing‘ which was released last Autumn. Both singles will be from the debut EP set for release this summer.

Speaking about the song, FERGUS says, “‘Sinking’ is about falling under someone’s spell. You don’t want to – you know better – but they’ve hooked you and left you marked, intoxicated. It’s about that feeling in your stomach. The feeling that twists and churns as it hurtles towards its conclusion. Like a storm they lift you up and they let you down; they tip you over, wreck you, and they swallow you whole – Inevitable as the sea“.

FERGUS has certainly drawn listeners in with his unique sound and we have fallen under his spell with ‘Sinking’.