Chase Atlantic Show How To Trigger A Wave With New Single 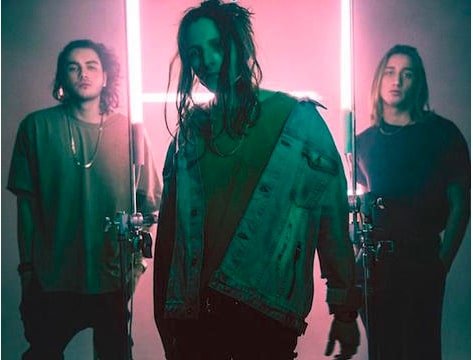 Discover Chase Atlantic, an Australian born and LA-based trio consisting of two brothers (Mitchel and Clinton Cave) and their longtime friend (Christian Anthony) who formed the group in 2011. With a big following in their home country, they are now taking on the world with EP trilogies ‘Part One’ and ‘Part Two’, the latter which includes forthcoming debut UK single ‘Triggered’. Chase Atlantic write, produce and perform instrumentally themselves and their music is dark alternative pop with aspects of rock and RnB. From starting out in their bedroom studio they caught the attention of the Madden Brothers and signed with their music management company MDDN. After securing a deal with Warner Bros Records in LA they have spent the past year in an actual studio writing and fine-tuning their distinctive sound.

The Cave brothers say of the opportunity, “The Maddens locked us away in a Burbank studio for three months and threw away the key. We really got to preserve that organic sound,” they explain. “To us, production is the most important thing, it’s the most critical element of creativity”.

‘Triggered’ takes you on a speedy ride through dark, twisting streets. The lyrics insinuate the feeling of being high and nothing can stop you and your feelings mirror that when you listen to the track. You feel rebellious and untouchable. There are many layered sounds and beats with an overall ethereal feeling. It’s the Weeknd meets Travi$ Scott meets the movie ‘Drive’. Mitchel Cave’s vocals are commanding and the song explodes with teenage angst and the heady pursuit of love which they describe as “Tarantino killing love”.

“I’m driving too fast in my lincoln town car and I think I just might flip it over,
I’ve been in a rage and I’m headed your way with the devil on my fucking shoulder,
Getting so high that I think I might die and I couldn’t give a shit about it,
Uppin all night it’s a clear damn sky but my head is feeling super clouded”

Chase Atlantic know how to make music that will play with your emotions, incorporating all genres that are in demand but with their own unique style. They are on our radar for sure.