“We’ve Been Childcare And We’ve Been Amazing!” Exclusive Interview With The UK’s Hottest Band 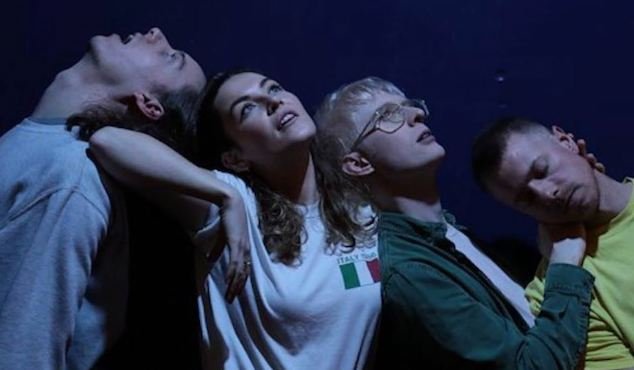 Ed, Rich, Glyn and Emma collectively make up Childcare. They are an up and coming new band who have playful, energetic punk rock inspired tracks like ‘Film Club’ and ‘Kiss?’  Their songs have been played on BBC Radio 1 and championed by Huw Stephens.

Childcare has recently finished touring with To Kill A King and I spoke to frontman Ed Cares about why he’s the coolest member, his favourite venue to play and their next single.

The band’s name comes from Ed’s previous job as a nanny in London. Ed enjoyed his time taking care of three children but something tells me he has a lot more fun on stage. The band certainly seem to be having a lot of fun on stage with their catchy songs and quirky lyrics. “The London date [at Islington Assembly Hall] was my favourite because it had the biggest crowd,” he says. As a frontman, Ed certainly commands the stage, engages audiences AND he’s certainly not shy. “We’ve been Childcare and we’ve been amazing“, is how he left the stage at one gig.

Childcare’s current single is called ‘Put Down Your Pen’ and you can see a live performance of the song which portrays the energy and feel-good vibes the band releases during their live shows. Childcare finished touring and were straight back in the studio the next day. “It’s a bit tricky writing on the road,” Ed said, “but in soundcheck, we tried a few things.”

The group’s next single, ‘Magazines’, is another song with unique lyrics (“I’ll bet that you like pot pouri“). The video, which guitarist Rich Legate is organising, promises to be intriguing, to say the least, and we can exclusively report that it will star “two cows; one handsome, the other beautiful.”

When asked why they are all so damn cool, Ed quipped that he was definitely the coolest member of the band (but we all know it’s really Emma, who plays bass). Regardless of who is your favourite, they all provide an undeniably innovative sound and great stage presence.

Childcare’s EP ‘Made Simple’ is available here and they will be playing at London’s Close Up Festival on May 12th and Camden Rocks Festival on June 2nd.