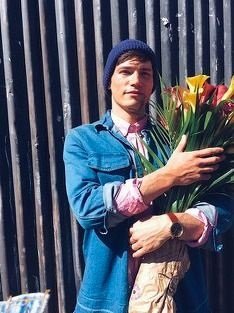 Sam Way is one of the most anticipated rising British artists of 2017 and his much-awaited debut album ‘Archetype’ will be released on 22nd September following his debut EP ‘Architect’ and ‘Pretty Liability,’ a recent collaboration with Henry Dell.

‘Archetype’ is a very rich album with a blend of genres and Sam way’s soulful voice caresses each note, each lyric. Singer-songwriter, Sam is accompanied by a range of prominent instruments from the piano, acoustic guitar, live drums and a string quartet. ‘Archetype’ is about love, longing, and loss; an honest portrayal of Sam’s mind and particular situations he has been through.

‘Archetype’ will feature the sentimental lead single ‘Share your Stone’ which has layers of instruments which are built brick by brick to provide much texture and create an anthemic feel to a song which could be very stripped back and therefore a totally different beast. Sam’s soft, tender vocals are set against highly personal lyrics, “let me take the weight, let me take the weight, til the end, I’ll be here as a lover as a friend, till the end, let me share that stone.” A simple offer to help share someone’s pain. The colourful music video was shot and directed by up and coming filmmaker Andrew Richardson. The visuals show Sam walking around recognisable London streets and markets which are drenched in sunlight and colour. Holding onto a beautiful bunch of vibrant flowers Sam smiles at the camera, but there is a pain captured in his eyes. He hands out flowers to people, sharing some light and love.

Despite his model looks and razor-sharp cheekbones, Sam is very relatable and his music showcases his talent for both songwriting and lyricism which releases true empathy, emotion and is almost a cathartic experience for the listener as I’m sure it was for him. ‘Half A Heart’ has an uplifting feel especially from the optimistic chorus, rhythmic drums, and soaring strings. ‘Last Page’ is a soft melodic tune that features a mixture of acoustics and piano. Sam’s harmonious voice steals the show with his mesmerising tone and pitch, not to mention the lyrics, “I want to end up on the last page with you”. ‘Emma’ is very powerful with pensive lyrical content and explosive harmonies. The album ends on ‘Home’ which is impassioned and reflective.

Produced at Cafe Music Studios (Brian Eno, Coldplay, Imogen Heap) with Cherif Hashizume, and mastered by chart-topping classical composer Edward Abela, Sam has created a distinctive sound for himself. His appeal is spreading around the world, having already drawn a sizeable fan-base in Turkey and his regular gigging is spreading the word further. He has performed in Sofar Sounds sessions in London and NYC and has just returned from touring the UK. I had the pleasure of attending Sam’s album preview earlier this Summer and he has an unassuming stage presence with a certain vulnerability which shines through in ‘Archetype’. It is a very accomplished and impressive album and you will find yourself wanting to hear it again and again.

Find out more about Sam Way when he recently did an exclusive Q&A for us:

How would you describe your sound to new listeners?
So the new release entitled ‘Archetype’ is out soon, and I guess I would start by saying I feel I’m working with a fuller, richer, more detailed sonic palate than before. We’ve included electronic elements with the more traditional ones, given the tracks more atmosphere, rhythm, and depth. We’ve even turned the sound of a crackling fire into a driving drum loop.

Tell me about your new album ‘Archetype’?
The album is called ‘Archetype’ for a reason. The songs all came together over 2016, lots changed in that year for me, and yet, despite acknowledging all the change, I often found myself telling the same stories. These songs, if you will, are songs that embody some of my Archetypes, the sides of myself, often conflicting, that live within me. Yet I also see that these aren’t only my stories, they’re other peoples too, explorations into the human condition that resonated in other hearts too. On a different level, this title also made me ask some questions about what it meant to be an Archetype, and if indeed I was one. I know where I came from, for 10 years my life in the arts was in fashion and I found music, as I pursue it now, quite late really. When I did I begun some sort of transformation, one that is still happening now, and one that has made me into some sort of hybrid that is bridging two worlds, as they seem to yoke together. Will I be labelled as another model turned musician, or will the music come to stand on its own? For all these reasons, the enquiry this word drew me into, Archetype seems fitting – whilst also, co-incidentally, inferring some connection to my debut EP, ‘Architect’ – Funny that. 😉

Earliest music memory?
I’m sat at the piano in the first home I remember living in and the scale has been written on the keys on masking tape going up from middle C. My index finger presses the notes down one by one – up and down the scale over and over again….

What is inspiring you musically at the moment?
Right now I’m challenging myself write a song a week for a year – So far I’m doing pretty well – but constantly challenging myself to find inspiration, makes you on the lookout for it all the time. Relationships are normally my go to for inspiration, mine, and other peoples, as they often hold the emotions I can relate to.

What has surprised you most about being in the music industry?
How freaking tough it is to get a decent manager who actually cares…

How different is it from being a model? Is there a smooth transition from one to the other?
The ride has smooth parts and bumpy ones alike, and yes they feel very different, despite having similar volatile elements to them. With music, the process itself takes so much longer, as opposed to a modelling job, that will usually be over and done in a day or two. An interesting polarity is that as a musician I am the engine, and as a model, though I may be the focus of the lens of the camera, I am a cog in the machine.

Is there a lyric or track of yours that is particularly meaningful to you and why?
‘When that times true, though I’m scared too, I will be here, for you’ Those lyrics are still carrying a lot of weight for me right now – They’re from the lead single from the new release – A track called ‘Share your Stone’

Are there are artists that inspired you while growing up?
I was hooked on the wordplay and playfulness of Eminem, drawn to the startling sound of Benga, and more recently blown away by the beauty of Ludovico. I’ve had a pretty eclectic taste in music for as long as I can remember.

Where is your favourite venue to perform and why?
Around a fire

What keeps you awake at night?
Homesickness

Who is on your playlist at the moment?
You can check out my official Spotify playlist below.

Describe a typical day for Sam Way?
No day is the same really, but it would be a blend of studio time, songwriting, exercise, friends, and ADMIN!!

Have you been to or are you attending any music festivals this summer?
I just got back from the final SGP and it was just epic. I love festivals and am hoping to get and play on the circuit next year after the release.

Guilty pleasure?
Recently – LOVE ISLAND – I have a legitimate excuse, however, as my friend Jamie was on the show.. 😉

Tell us a secret
I have a thing for Ninjas

What’s next after your album release?
More music coming from me, I’ve already been back in the studio and things are coming on nicely. Watch this space and follow me on Instagram @iamsamway