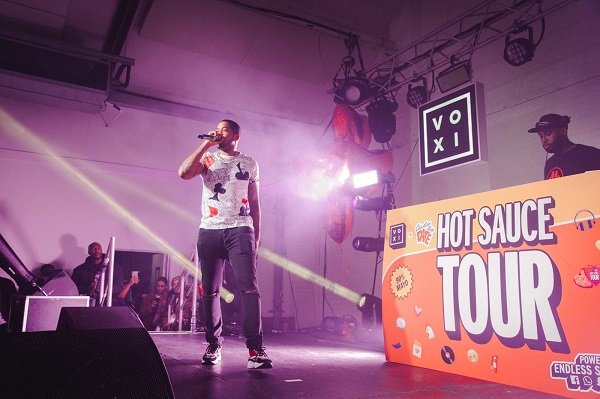 The VOXIHot Sauce Tour was hotter than hot, it was piping hot, it was on FIRE as the spicy lineup took over the stage. Surrounded by artists such as One Acen, Unknown T, Alicai Harley, DJ Damn Shaq, Chip and the Chicken Shop Date legend herself, Amelia, it meant that there was an exciting crowd of Hip-Hop and Rap fans. With free chicken on the menu (I mean who doesn’t love free food?) and free merch (that’s something I’ve never said before), this tour was full of surprises and it didn’t break the bank.

Chicken Shop Date is the spoof dating show where Amelia Dimoldenberg eats fried chicken, (if you couldn’t tell by the title), with some very talented artists. Sounds like the dream to me. With the likes of Sean Paul, Rae Sremmurd, Maya Jama, and Krept and Konan on her list of people she’s had a chicken shop date with, it was no shock that Amelia managed to bag some famous artists for the finale of the Hot Sauce tour at the Oval Space, London

Mosh pits occurred with dances such as the ‘Gun Lean’, ‘Milly Rocking’ and ‘dabbing’ making an appearance, the full stomach of chicken and chips didn’t stop the crowd. With the help of DJ Shaq keeping the crowd’s energy up, Amelia’s dry but hilarious humour shone when she introduced each act.

Alicai Harley was up first and her luminous green bob made her distinctive. Making the crowd repeatedly say her name, she managed to get it stuck inside my head, a clever way to make us not forget her. Giving off a Stefflon Don vibe, Alicai’s dance moves didn’t go unnoticed, and neither did her hip-hop singing voice. Up next to perform was One Acen, with his rap, R&B, and Afrobeats vibe hitting the stage. Performing his smash hit ‘Vica Versa’ while jumping around the stage in-between flashing lights, I can picture One Acen at Wireless within the next two years.

Third to hit the stage was Unknown T, who is actually pretty ‘well known’ based on the reaction of the crowd and by how excited I was to hear him rap ‘Homerton B.’ As soon as the beat for the beginning of ‘Homerton B’ came on the crowd went wild. ‘Damn Shaq’ kept reloading the track which meant you got to relive the moment of excitement over and over. Hidden behind his tinted sunglasses, and the smoke from the smoke machine, Unknown T will have to change his name to ‘Known T’ very soon. A quick appearance from ‘M Honcho’ wearing his famous balaclava that makes him look like he was going to rob a bank after the show, his trippy style of rap he calls “trap wave,” was new to me, but it was clear that there were fans in the audience. 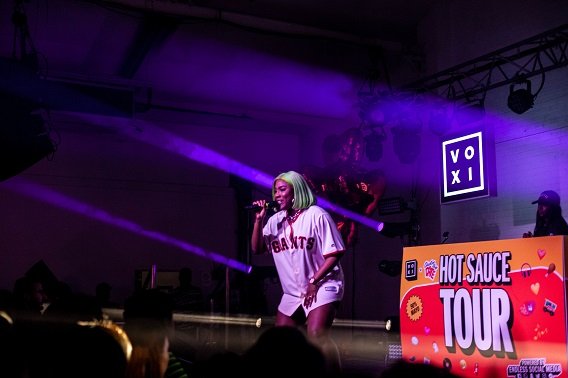 Finally, Chip. AKA ‘Chippers’ as Amelia liked to say in her french fries costume which I must say she rocked. Although Chip shot to fame at just 18 years old after signing a major record deal with Columbia Records, now at 28 years old his name is still in peoples mouths as the majority of the packed out venue was there to see him. In his white t-shirt with arms full of tattoos, Chip performed some of his cutting distracts and also his newest music, offering a good time for his day one fans. 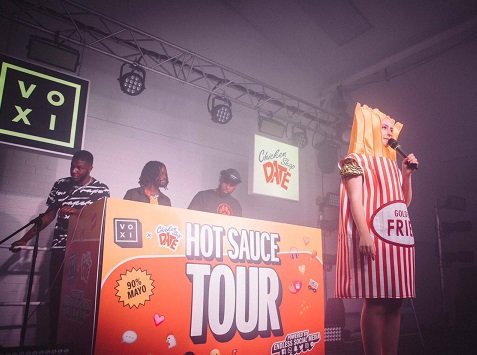 The ‘Chip Hot Sauce Tour’ was better than I could’ve imagined. It was up to date with the Hip-Hop Scene and Amelia is a natural at presenting. It just goes to show that we should forget about Miller and Carter and just take our date down to KFC…

Read our interview with Donae’O who performed on the Manchester leg of the Hot Sauce Tour.