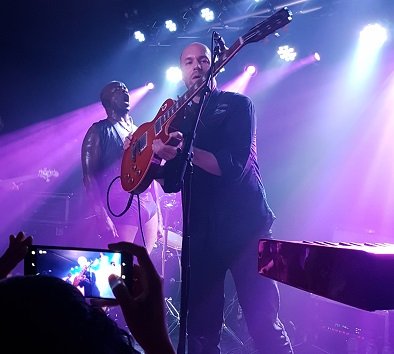 It’s hard to pin down Oxbow to a single genre, and that’s the way it should be. The band experiment, and the difference between their debut Fuckfest (1989) and their most recent, Thin Black Duke (2017), would leave most listeners thinking both albums were put out by two different bands. Fuckfest’s harsh raw sound is epitomised Frontman Eugene S. Robinson’s distinguishable high pitched whiney vocal approach, heard throughout the album opener ‘Curse’. When they returned to music last year, after a ten-year absence, with ‘Thin Black Duke’, they couldn’t have returned with a more extraordinary album. Oxbow sound incredibly crisp and the addition of orchestral instruments adds a lot of depth to the album. Robinson’s performance is a standout with his style swinging between whispery slurred spoken words and shouted straight to the point out statements. The band’s use of dissonance and unusual chord structures gives the music great contrast with sections deeply colourful and others starkly dark, as you can hear at the end of ‘Letter of note’.

Their gig at Oslo in Hackney was their last of five dates played in Europe and was their first London show since April last year. I was interested to hear how the latest album would be performed live and how it would sound. With the album’s additional instrumentation, I wondered how this would be orchestrated with only the quartet performing. I was heavily impressed. Oxbow’s performance and the energy they have onstage was thrilling. Robinson gave an electrifying performance and was a joy to watch as he frolicked around the stage with sudden bursts of motion and whilst being almost entirely naked. The band’s set mostly containing songs from Thin Black Duke, with a few others from earlier albums too. The quartet had great unity and their togetherness and musical instinct were fantastic when it came to both hits within the music and slower songs.

Oxbow is definitely a band you should see live. They are also a band you should really listen to. Their music is clever and incredibly different from album to album, each one showcasing their versatility for composition and sound. Oxbow is well worth a listen.