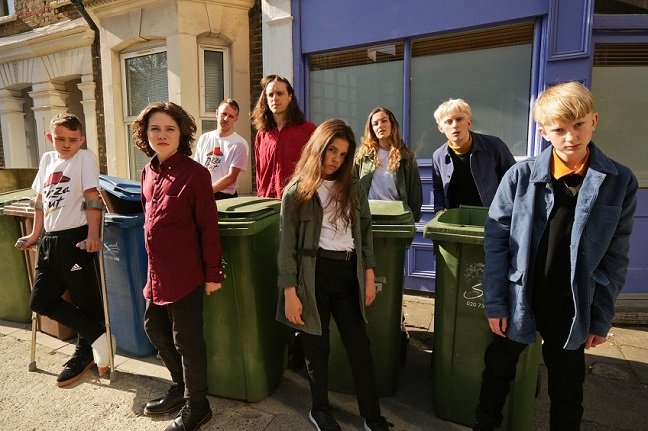 ‘Man Down (King Kong Shake)’ first made an appearance as an interlude on Childcare’s recent ‘Luckyucker’ EP and now we have been treated to the full version as it is Childcare’s latest single. It is the first single from the band’s upcoming debut album, due for release early 2019.

The Indie favourites use an odd choice of words for their infectious, discussion-provoking single, however, Childcare is nothing if not unconventional. They continue to push the boundaries with their tracks; this time focusing on the societal paradigms existing around masculinity, and it comes at an important time. Toxic masculinity is a sensitive issue. Ed Care is here to help, “At the risk of being accused of jumping on the mental health bandwagon, this song is a rallying cry to my fellow man; be vulnerable, be open, be sensitive and don’t be afraid to moisturise your knuckles if they get dry.” Well said, Ed.

Emma Topolski’s sublime vocals feature heavily on ‘Man Down’. The drum beats originate from the band’s first use of a metronomic drum machine, rather than traditional live drums. They provide comfort to the listener, whilst Childcare push the boundaries of music, yet again.

This seductive, slow-paced track is one I find myself humming the opening lines too, without realising (“So would you lay your head on my hairless chest? You wouldn’t need to speak or even make a sound“). Despite a serious issue being addressed, it is still playful when discussing the constraints of the male stereotype. Perhaps this is why Childcare is comparable to Graham Coxon in terms of songwriting style and talent. The vocals are simple and unassuming, yet pleasing to the ear and Emma’s vocals are just beautiful.

Childcare formed in 2016 when frontman, Ed Cares, worked as one of West London’s most in-demand male nannies. After encouragement from one of the children he took care of, he enlisted Emma Topolski (bass), Rich LeGate (guitar) and Glyn Daniels (drums) to complete the group. Thus, “a tribute to British awkwardness” was formed (Wonderland Magazine).

Enthused with the energy of punk, and the infectiousness of The Police (coincidentally, one of the band’s earlier songs includes the lyrics, “leave your light on”), Childcare are”really f*cking good” (Indie Shuffle) and their brand of idiosyncratic, art-punk pop is a band which is gaining momentum (and fans!) rapidly.

Childcare supported Bastille on their recent arena tour and Bastille’s Dan Smith wore a cap with ‘Luckyucker’ emblazoned across it when he played Neverworld festival recently so it is safe to assume that he is a fan. Childcare has released 2 critically acclaimed EPs; ‘Made Simple’ and, more recently, ‘Luckyucker’. The band has also received extensive BBC Radio 1 support, i.e. for example, airplay on Huw Stephens’ show. Annie Mac is quoted as saying, “I love this band.” And what’s not to love? They’re cool, seriously cool, their music is infectious and, on top of that, they’re amazing live!

Childcare’s ‘Luckyucker’ tour starts Oct 5 so grab a ticketif you can and, in the meantime, have a listen to ‘Man Down (King Kong Shake)‘.

Read our interview with Childcare.