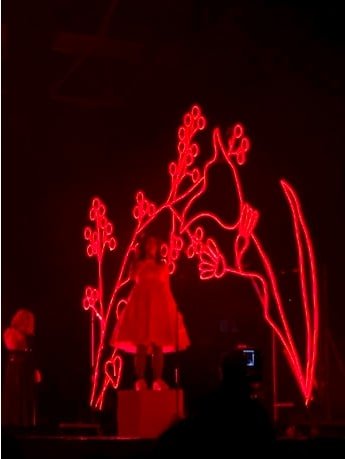 Fans flooded Alexandra Palace with beady-eyes awaiting to catch a glimpse of Ella
Yelich-O’Connor. Mostly known as Lorde, Ella is to be considered the future of music in David Bowie’s eyes and was invited to pay tribute to Bowie at the Brit Awards.

MTV 2017 VMA winner Khalid warmed up the audience with his very charismatic
personality, and a solid mix of soul, synths, and rock serving tunes from his debut album ‘American Teen’ such as the heartfelt song ‘Location’ and his hit ‘Young Dumb & Broke’. Khalid pumped the venue with his ecstatic dance moves, mesmerizing light show, and brilliant touring musicians.

Introducing Lorde to the stage and setting the artist’s dark, abstract vibe throughout the audience was show vintage video footage shown on a prop TV. These retro-looking videos of Lorde used during her costume changes all previewed her ideas and on-going journey about stardom.

Lorde blesses the atmosphere with her self-aware, celestial movement pieces assisted with like-minded dancers connecting physical stances to real, hard feelings. A dynamic only Lorde could co-ordinate to perfection. Ella possesses a similar, but a modernised spirit of Stevie Nicks. To effortlessly captivate an audience in a manner so enchanting it is almost perceived to be a witch performing

Ella pays close attention to a loving crowd, achieving devoted participation with them
showing all emotions, even comedic ones. The fourth song into the set and she is already pulling cunning stunts enticing ‘Ally Pally’ into the extended intro of ‘Buzzcut Season’ sitting playfully on the floor with a children’s xylophone. Ella shows her tears as she speaks to the crowd, reminded that it was the four-year anniversary mark of her debut album ‘Pure Heroine’s release date. She then talked about how much she appreciates her fans before singing ‘Liability’ (Reprise).

Lorde’s tour has been based around her latest album released on the 16 of June, ‘Melodrama.’ Melodrama, meaning a sensational dramatic piece of material intended to appeal to the emotions. My verdict is that Ella has achieved this with such phenomenal might, pushing mainstream borders to its limits; it reached #5 on the UK Album chart and topped five other global charts.

My only wish for the performance is that within the small orchestral group supporting Lorde perform, that some horns were included. Reason being that the song ‘Sober’ could have had more of a punchy effort during the choruses matching the recorded version on the album.

On the 2nd of October, Lorde posted a thread on Twitter “will u love me? will u?”, Followed by a short video of a recorded song playing with herself singing. For eight hours, Ella left fans confused and wanting more information until she finally completed the thread with “just an old Melo sketch.” Referring to her latest album, ‘Melodrama’. Will this snippet of a song forever be a hidden treasure? Alternatively, a new feature within an upcoming deluxe version of Lorde’s latest work? I shall surely be investing.