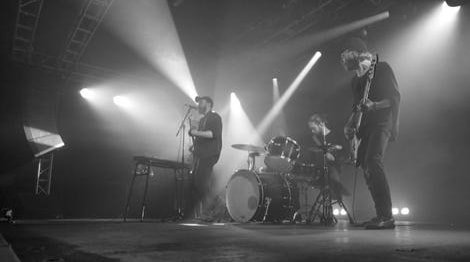 Playing at The Great Escape on the 18th of May, it was clear that word had got out that ABQ, the N.Irish alternative four-piece, were ones to watch. The Mesmerist, with its intimate atmosphere and prime location in Brighton’s city centre, provided the perfect venue for their feisty and energetic performance.

The boys began their gutsy set with an anthemic rendition of ‘Something Original’ before moving onto ‘Edge of the Earth’, a track with artful lyrics and an infectiously catchy melody. They then moved onto ‘Days We Leave Behind’ a song with the kind of musicality that conveys exactly the message that the title suggests: an optimism for the future but an understanding of the days behind them.

‘Waiting for Us’ and ‘Neon’ were then played, both tracks that showcased ABQ’s talent for writing high energy and yet lyrically meaningful tracks. ABQ then arrived at the last song of their set, their highly anticipated debut single ‘Takes So Long’. Beginning with a simple guitar riff it was not long before the track exploded into an animated and robust performance, the crowd were visibly moved by the vigour of this final track – and rightfully so.

All in all, it was a performance that highlighted ABQ’s characteristically charismatic performance style and their expert musicianship. Having spent May performing in various cities in the UK the boys are now gearing up for the release of new music and potential live shows. Stay tuned to find out more about enigmatic alternative pop group ABQ….