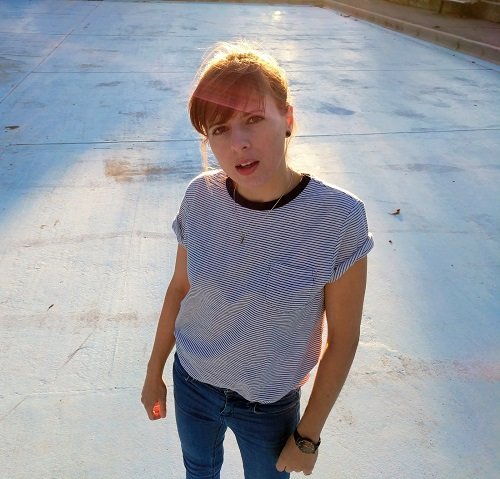 Multi-talented musician Zoe Konez is the main songwriter in Cat Bear, in her solo songwriting guise. She is also behind London showcase “Stop Look Listen”, who has put on the likes of Eliza and The Bear, Kimberly Anne and Holly Walker.

Neon Music’s Ty Bennett chats to Zoe about her new song ‘The Sweetest Thing’ and the importance of supporting music artists at grass-roots level.

What was your process for writing this song?
The process was quite long but really enjoyable and I learned a lot from it.

It started with a piano part which just happened under my fingers and the melody followed. As you can probably hear, lyrically I was in a great mood! I was feeling warm and content in love and life.

I recorded a very rough version of the piano and vocals and layered an electric guitar over. I don’t usually write songs on the piano, so I took the opportunity to really think about how I wanted the instrumentation to complement the song. The middle section is a hint of my acoustic guitar playing which people often remember me for, so it was nice to include it, and that was the final part I finished of the song before I layered up the sounds to finish the recording.

What is the best song for bringing people together?
Of mine or someone else? Of mine I’d say ‘Bones’ – the chorus is all about being there for someone else and I always get the audience to sing as one big group choir when I play it live.

Someone else’s song? Pick any 80s power ballad – the classics! Gets any room of people singing along.

What do you wish you’d done differently on your musical journey?
Everything has led to where I am now and I’m really happy. The only thing I’d change is I’d make more time for making music. I’m a bad one for letting everything else but music making take over my diary.

What achievement/experience are you most proud of, so far?
The release of this single – The Sweetest Thing Is Love – has been an amazing process, from the start right up until today, I’m really proud of the journey of the song.

What is a song you wish you had written?
‘Baby Shark’. The Genius.

Do you think that there is a way to support emerging musicians – at a grassroots level – that should/could be implemented?
I think we are so lucky to live in an age where technology lets us record our own music and distribute it ourselves, so we have a lot! I think it can be very difficult to navigate your own promotion past a base level of engaging your friends and family, but those with smart ideas and a genuine enjoyment for making music will shine.

One of my favourite grassroots level support networks is the Featured Artists Coalition – they do loads for established and new musicians. Their board member, singer/songwriter Roxanne De Bastion also puts on a fantastic one day conference for independent musicians each year called From Me To You – it’s coming up on December 1st if you are interested!

More could be done by outside forces, such as better support of live music from venues, but there is power in banding together, learning from and collaborating with other artists, and events like this help with that.

What would you like to see happening in the music industry today?
I’d like to see more education available from school level right up to music industry organisations, for people who don’t get access to developing skills in the technical side of music. There are some great schemes out there such as #NormalNotNovelty, First Timers Fest, and Girls Rock London, but I want to see many more non-cis-male music producers, studio engineers, live sound technicians. I want to see people out there working in the field encouraging others to join in and breaking down the walls of the boys club. It’s definitely happening, it’s just taken many years, and hopefully, there will be even more diversity in the years to come.

How would you sum up the British music scene today? (In a few words)
Healthy, exciting, vibrant

What is the agenda of ‘Stop Look Listen?’
Stop Look Listen exists through me and my drummer Will’s desire to play to audiences who listen, in a welcoming environment, which is a pleasure for the acts to play. Playing gigs in London can be a challenge, and hopefully, as musicians ourselves, we offer an enjoyable evening for the artists who play and the people who come to watch them. We’ve been doing it for almost 8 years now so we seem to be doing ok!

What advice would you give to aspiring musicians?
Spend all the time you can developing your sound, learning tools that will help you, talking to other musicians, being open and learning from each other. Don’t expect the world to owe you anything, stay positive, show perseverance and practice resilience – keep bouncing back, and enjoy yourself.

What are the three things an artist needs in their toolbox in order to begin a journey of success?
Great music
To believe in that music – to feel compelled to carry on even when no one listens
Communication skills to help others believe in you as well.

If you could tell one artist, dead or alive, one thing, who and what would it be?
I have no idea! Sometimes it’s best not to meet your heroes…

What’s next?
I’m one half of CATBEAR, who is releasing a new single ‘Beast Of The Night’ on November 23rd. Then I’ll release another solo single in the new year, which is a collaboration with Antonio Lulic. Then maybe do some live dates – I love touring in Europe, but it takes quite a bit of organising, so watch this space!

Read about Zoe’s new single ‘The Sweetest Thing Is Love‘.