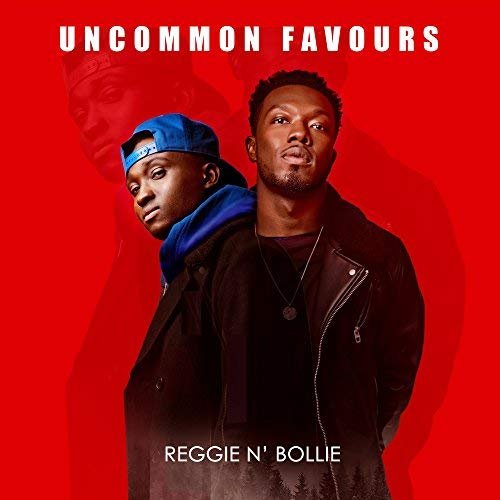 Reggie ‘N’ Bollie need no introduction from us and they continue their journey of independence bringing joy and flavour to the masses with their debut album ‘Uncommon Favours’. Released via their independent label F.R.O.D Music the uplifting duo has incorporated plenty of Afrobeats and Dancehall with Soca undertones in the 17 track album.

As Bollie says so eloquently during the meaningful ‘Intro’, “We represent a sound of the future, unlimited to a particular genre of music, a master combination of our cultures from where we were born to the places we’ve lived and the legends we’ve learned from.”

Collaborations include the legendary Beenie Man with ‘On The Floor’ and 2Face Idibia with ‘All The Way Up’ as well as Wiyaala, Wutah, Che Chesterman and DJ Ironic & Lauren Murray.

​​The whole album is an absolute joy to listen to, but personal highlights include the super catchy singles ‘Bumaye’, ‘On The Floor’, the dynamic ‘Going Down There’ which makes your body throb (you can see the brand new video here), dance/pop hybrid ‘Advise Me’, the more stripped back and mellow ‘Dreams’ as well as chilled ‘Turn It Up’ (David Ezra Remix). There is something for everyone in ‘Uncommon Favours’.

So if you’re feeling a bit blue now you’re back to the daily commute, alcohol detox and diet after the holidays – stick this album on and get in a party mood all over again. We live in a dark world and we need artists like Reggie ‘N’ Bollie to spread the light through music.

As Reggie says in ‘Intro’, “we bring the vibes, we bring the good vibes.” And they certainly do.

You can stream ‘Uncommon Favours’ here.