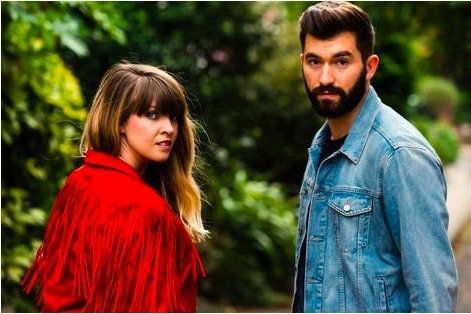 The brand new single ‘As I Leave’ from Alt-Country duo Two Ways Home shows a different direction for the UK-based pair. Lewis exchanges his acoustic guitar for the Electric to give the track a more rock edge. Isabella contributes with a whistle-tone harmony and tender vocals. ‘As I Leave’ was written in Nashville with The Young Fables, a local country duo who have formed a tight friendship with Two Ways Home.

Lewis comments on the collaboration and the making of the song, “I remember being in our Nashville hotel room, sitting around a table with Wes and Laurel (The Young Fables). We each played a couple of songs for each other and suddenly Isabella came up with the line: ‘standing here beside you looking in, I don’t know what to say or how to begin’. We knew straight away this one was going to be special. It wasn’t going to be a straightforward breakup song, we were looking to explore a different avenue and ended up writing from the perspective of someone who had fallen out of love but who was still very attached to the person that they were going to break up with. It was brilliant working with Wes and Laurel, especially as Wes has a very Jazz led background, which is heavily reflected in the chord moves throughout the song and we are looking forward to seeing them again when we are in Nashville at the end of this month.”

‘As I leave’ is about preparing for a painful breakup and the emotion is reflected in the sombre tones and honest lyrics,

“Standing here beside you looking in, I don’t know what to say, or how to begin, with every word and every line I see, the air is getting thick I’m barely breathing, how do I say I’m already gone.”

Isabella describes the song from her point of view, “As I Leave is very close to my heart. It’s the feeling when you have fallen out of love with someone and you know it will break that person if you end it but at the same time it is going to hurt you just as much if not more, knowing that you have caused someone who you care deeply about so much sorrow.”

Two Ways Home had a busy and successful 2017 from the release of their ‘Closest Stranger’ EP and follow up single ‘Outlaws’ to performing at Country Music Week, along with major shows at London’s Green Note and The Arches as well as shows in Nashville (USA), Vienna (Austria) and Festivals around the UK.

As always, Isabella and Lewis are in tune with each other’s thoughts, feelings and emotions and portray defiant heartbreak with a polished, millennial country tone. Their music is always introspective and deceptively unassuming. They are a breath of fresh air on the UK country music scene and beyond. 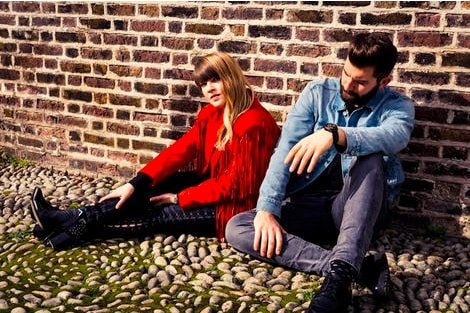 The talented pair are currently in Nashville and kindly took some time to answer a few of our burning questions about what they have lined up for this year and more:

Tell me about your new single ‘As I Leave’?
Lewis: The last time we were in the studio we cut 6 tracks and this one felt like the black sheep of the bunch. We love the song and it has a slightly different feel to what we’ve been writing recently. As I Leave was written with Nashville based duo The Young Fables and Wes’s jazz-influenced approach helped take the chord sequence to a slightly more unusual place and writing with Laurel helped us come up with quite a haunting vocal melody in parts.

Isi: As I Leave is a slightly different take on a breakup song as it is from the perspective of the person that is doing the breaking up and its the feeling when you break up with someone who you are truly connected to but you know your not in love with this person anymore. Quite sad really.

How did you both come together to form Two Ways Home?
Lewis: We met at university and after briefly playing in a pop/rock covers band together we started writing songs and playing open mic nights in London. We were experimenting with a more country sound and blending our harmonies to suit this so we decided to save all the money we had and then flew out to Nashville in 2012. This helped us hone our sound and after playing a bunch of shows and figuring out exactly what music we wanted to make we formed Two Ways Home.

Why the name Two Ways Home?
Lewis: It came after a very long quest for a name, as Isi is originally from Vienna, Austria and I’m from the UK, we were travelling a lot at this point and we figured that wherever we were in the world there was always: Two Ways Home… I think the name also means a few other things to us and is hopefully interpreted a few different ways by people who listen to our music.

How would you describe your sound?
Isi: We blend different styles, mainly Country, American, Folk, Rock and Pop. I like the term Alt-country meaning alternative country.

How do you go about writing your music together?
Lewis: We try and mix up where we write and instruments we write on but often one of us will have a line or a short idea that we will talk through and decide what it means to us and flesh out the song from there. Occasionally one of us will bring a riff to the other on an instrument and we’ll go with the vibe of the song first.

What is inspiring you at the moment?
Lewis: I get a lot from people (friends and family) and the situations they’re in.

Isi: I love people watching and also art exhibitions are a great source of inspiration.

What shows/festivals are you most looking forward to this year and why?
Lewis: We have quite a few shows this summer that we are over the moon to be playing! We’re super excited to be in the line-up for The Long Road festival, and also really looking forward to Millport Country festival. We also have a few other great slots yet to be announced.

Isi: We also run a Nashville style Writers-round in London called The Round Up and are always happy to play this and showcase some of our favourite new acts as well as some amazing songwriters.

What do you find are the biggest challenges about being in the music industry?
Isi: One of the hardest things for us is finding the time to fit everything in. There are so many aspects of being an artist and knowing what to prioritise can sometimes be tricky.

And what do you enjoy most?
Lewis: Live shows have always been one of the most exciting parts of being an artist for me. Preparing a solid live show, rehearsing it, to then getting out on stage and performing is one of the best feelings.

Isi: I totally agree with that, but I also really enjoy writing new songs.

Favourite venue/city to perform in?
Isi: there are too many to name but I would really love to play the red rocks amphitheatre in Colorado because it looks absolutely breathtaking.

Lewis: I would love to play Brixton Academy(London) because all the shows we have seen there lately have been amazing and the sound is always great in there.

Dream collaborations?
Lewis: We would really like to write a song with Sean McConnell or collaborate with Marty Stewart and his band.

What’s next for Two Ways Home?
Lewis: We are currently writing this in Nashville in the middle of a thunderstorm, our immediate plans are: to make it through the storm, then we’re travelling to Vegas and then Austin, Texas. After we get back to the UK we have a show on the 26th of April at 229 Great Portland Street with Megan O’Neil, then the 1st of May with Emily Faye at the Bedford. We will be continuing to host The Round Up on the 1st Thursday of the month, which is a Nashville style Writers round and then we’ll be rehearsing for summer festivals and working on new material with our band.