It was the Spring bank holiday weekend and another Common People Festival was just about to get going. With two sister festivals in Southampton and Oxford occurring on the same weekend, the lineup just swapped days with the likes of The Jacksons headlining Saturday and Sunday at Oxford and Southampton respectively. This was with the exception of a few bands including Dream Wife who were smashing it at BBC Biggest Weekend in Belfast on Saturday. 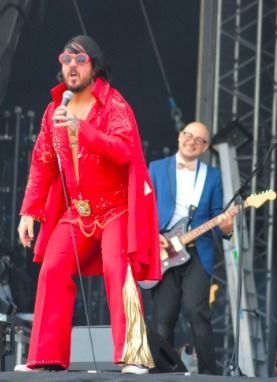 I managed to get up, do some work and get to the festival ready to watch Pivotal kick-off Southampton’s main stage at 11, and they did it in style. Having won their place at a showcase held at the Joiners a few weeks prior the festival, their performance showed exactly why they were an excellent pick to not only play the festival but be the first band of the weekend.

​​My biggest surprise of the festival was Elvana. Having heard of them and seen them on numerous festival line-ups I always thought “Elvis fronted Nirvana” would be a poor gimmick used purely to get people to watch them. In some ways, they use the weirdness of their band description to their advantage, but they certainly pull it off. Playing Nirvana songs including ‘Smells Like Teen Spirit’ with excerpts of Elvis songs added randomly in the middle, their performance was incredibly well thought out, and what sounds like a very strange idea works surprisingly well.

My other highlights from the Saturday have to include The Sherlocks, Honeyblood, and headliner Lily Allen. I was extremely surprised how much I enjoyed Lily Allen’s set. The British singer-songwriter performed a truly inspiring set. With the crowd experiencing throwbacks to the 2000s mixed with her new slightly more relaxed Lily Allen songs it was clear to see how she has grown as an artist whilst still producing absolute bangers. 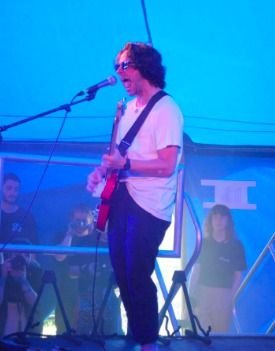 After such an incredible Saturday, I was even more for Sunday’s Disco Day. Again, I got their early and saw Southampton based Wild Front open the main stage. Within the first few songs frontman Jack Williams had used his teeth and a violin bow to play his guitars. I then moved onto another Southampton based band, Djuno. Providing a personal favourite performance of the weekend, the rock riffs mixed with lead singer Courtney’s incredible vocals create a sound truly incredible for a band who are only in their infancy. Black Foxxes and Ben Goddard were also providing very memorable performances for all the right reasons. Both artists provide very different sounds but they both filled the Uncommon Stage which was a rare sight over the weekend. The Uncommon Stage was again filled later in the evening for Dream Wife. A band who have recently released their self-titled album and have been rocking venues up and down the country, and they did not disappoint. Then it was time for the Sunday headliner, probably the most famous musical family on the planet, The Jacksons. With Tito, Marlon, Jackie, and Jermaine gracing the Common Stage to provide what can only be described as more of an experience rather than a performance. With videos of their lives, an incredible tribute to their late brother Michael and Tito Time, it was truly a once in a lifetime moment. Whilst taking photos I even managed to get a high five from Marlon!

Common People has again managed to produce a truly incredible weekend and I would thoroughly recommend going next year, I certainly will be looking forward to it.

All photos by Henry Groves