Chloe Foy’s ‘Asylum’ Is A Slice Of Blue Tinged Folk 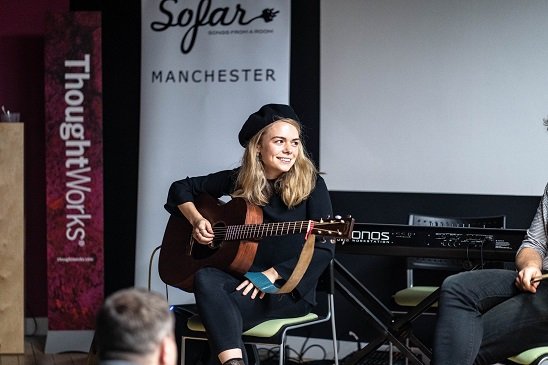 The soundscape to Chloe Foy’s latest single ‘Asylum’ is a blue and grey wash, speckled with turquoise strings, textured by rolling piano and filled with bright bursts of colour as the vocal arrangement moves over the scene like a storm. The music video is the perfect companion to this, bringing the song to life in a manner that mirrors both the narrative and the visual instrumentals of the indie-folk single.

Opening with still landscape seaside shots, ‘Asylum’ sets the tone for a traditional folk music video. Acoustic guitar and Foy’s low, almost gravelly voice, leads us into a song about the simpler ways of living. Foy plays around with country and pop influences on this track, with honeyed harmonies and a vibrating drum beat.

The video depicts Foy on a fishing trip with a fisherman, painting pictures of Spring days on the sea without distractions. As the instrumentals build with the vocals, ‘Asylum’ starts to feel like an entire orchestra is dancing in your headphones, even though it’s only a small arrangement of instruments. The ebb and flow arrangement is exquisitely mirrored by the waves and panning camera work in the music video, as well as in the lyrics which speak of the ebb and flow of life.

Chloe Foy hails to be one of the great female singer-songwriters emerging on the folk market. Influences ranging from Laura Marling to First Aid Kit step in and out of her sound, but it remains unique. ‘Asylum’ is the latest release since 2017 EP ‘Are We There Yet’ and debut EP from 2013 ‘In the Middle of the Night,’ both of which are vibrant folk albums that should not be left off your Sunrise playlist.

Chloe’s music is as ambient as it is tender so that instead of falling in love with her, you’re slowly reclining in love. But either way, you won’t be able to get the ripple of her voice out of your head for days.

Chloe Foy will be performing at Gullivers, Manchester on 26th October and at The Old Bookshop on 1st November. Find out more and book tickets.