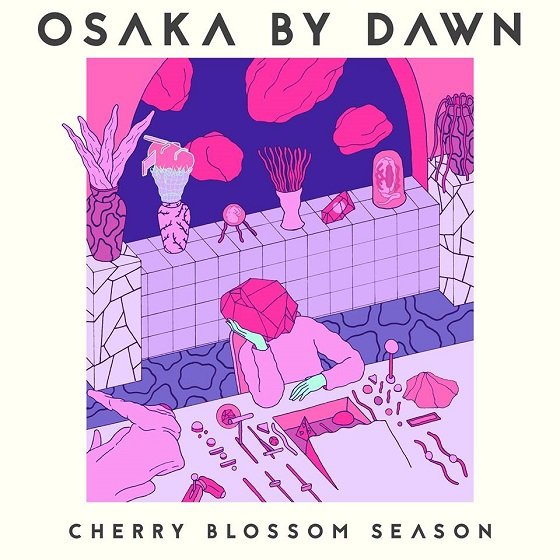 It’s music that, when played over the speakers, someone always looks up from their vodka soda and says, ‘who’s this?’ It’s music where you find yourself entwined in the tune and entranced by the lyrics. Music that lifts up your mood and fiddles around with it; perfectly at pace with a warehouse rave, a rainy walk, uppers, and downers and hanging arounders. It’s holding up a mirror to the conformity and complexity of youth culture; brazenly toeing the boundary of politically incorrect in an effort to show how the term no longer exists when we judge everything off the tip of our tongues. It’s unfollowable but catchy, climatic but cool. It’s Cherry Blossom Season.

‘Osaka By Dawn’ is the second EP by songwriter-producer duo Cherry Blossom Season, who brings us a stream of indie-electronic, Japanese infused singles that readdress the balance of lyrical weight and instrumental motifs. Seeped in reverb, solid synths and city soundscapes, their latest series of songs continue to look at young society through a lens of post-modern irony and lyrics so tongue-in-cheek you’re not sure if you’re offended. Written and recorded over a weekend in Paris last year, songwriter Jake Bennett and producer Fabian Garduño, who make up the duo, are blazing with electricity in ‘Osaka By Dawn,’ the follow-up EP to ‘Kyoto By Night.’

Opening track ‘Audrey Hepburn’ sets the scene for the generational angst that is to follow. A plethora of electronic sound weaves in and out of plucky bass, drawling walky-talky vocals and a tribal rhythm. The opening wind chime opposes the closing moment of clashing cymbals and slowed down vocals, the first indication that everything on this EP is a juxtaposition. Likewise, Jake Bennett is at his most flippant lyrically, picking up the pace with lines like, “your body’s not the best/it’s made up for by your chest/and you’re gorgeous from the face up.”

The dynamic change of rhythm that slides up the score in ‘Audrey Hepburn’ makes ‘Undertow’ appear comparatively simple. One of the highlights of the EP, ‘Undertow’ jumps right in with the hook and crystal vocals. Stirring instrumentals and an infectious drum beat make this track a powerhouse of pop, rock and electronic influences. Lyrics toy around with the idea of looking for fleeting, mysterious intimacy, but also wanting someone to get under your skin.

The razorlight production from Fabian is at its best in ‘Steps pt. II’ where there is something tangible about the sidestepping beat and unorthodox arrangement. Fabian reworks the traditional music model: filling instrumental breaks with softly spoken Japanese and Spanish, that seeps its way into the chorus and acts as backing vocals. There’s a diversity in this track that is rarely found in indie music, and it’s a gamble that certainly pays off. The message of ‘love’s cheap’ mirrors ‘Kyoto By Night’s’ stand out single ‘Part Time Passion.’

Similarly, the production choices in, ‘Postpone’ are polished; harnessing electronic guitar breaks to give you room to breathe, without which the track would be too intense and overwhelmingly electronic. “Unzips first, she thinks first,” “damsels of disaster” and “land of the free where nothing’s cheap” are seemingly easy lines which carry an emotional weight, depicting Jake’s songwriting prowess at its finest. His ability to write scenarios which resonate with his audience, before he distorts them to reveal the flaws of our behaviour, is unprecedented.

The closing track, ‘Bad as They Come’ could not be finer. Showing off the duo’s mastery of musicianship, it provides a pseudo-look into the minds of one-night stands. Deeper, sultry vocal work mirrors the thunderstorm that plays in the background, taking on a foreboding quality and elevating the complexity of the theme. Jake carries the anthem under his breath as he purrs, “I’m tired of the antics of hopeless romantics’ and ‘strangers in bars who f*ck for the sport and girls who go home for the story.” The humming bridge is laden with synth and could easily fall into the whistles-and-bows of overproduction yet manages to stay streamlined.

Gorgeously idiosyncratic, Cherry Blossom Season have a sonic edge that is almost too hot to handle. Where Jake serves as the generational mouthpiece, Fabian restructures the score into a unique blend of indie and electronic music. Farcical but brutally correct, Osaka By Dawn’s searing assessment of society is not to be excluded from your night out, for it makes you move as much as it makes you think.