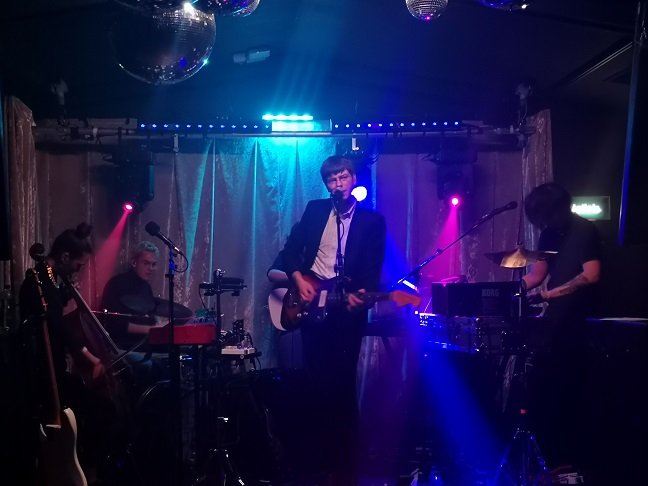 With a band named Yes We Mystic who have a new record out on a label called DevilDuck Records – this project could have the potential to be interpreted as something quite mysterious.

However, vocalist and guitarist Adam Fuhr and bandmates are authentic and brought the goods last week at their Highbury & Islington Thousand Island gig. Delivering a strong set with highlights including cuts off their new record ‘Ten Seated Figures’ the band gave an energetic 12 song set.

It is enjoyable to see art at the front of this setup – which becomes even more obvious when Fuhr talks to Neon Music after the set. Fuhr talks confidently and with purpose, coming across very approachable and happy to answer journalist’s questions despite having walked off the stage minutes earlier. With the new record serving as Fuhr’s debut as a producer in the studio, the growth of an artist is exciting to see – with the quality of new music far surpassing the bands last outing – 2016’s ‘Forgiver’.

The night opened with ‘Italics’ – track 3 on the new album. The band was able to command an energy that mixed a range of complex and distorted vocals and instruments including haunting delicate strings, crashing drums and commanding guitar riffs.

The most exciting thing about this show was when Fuhr roars he means it, delivering raw, strong vocals in front of the industry-heavy crowd.

The Winnipeg natives made sure to shout out London and thank the crowd for coming before flying to Germany for more shows in the coming weeks. Artists in their element are always great to see – Yes We Mystic look like they are living their dreams, the balls are now in their court with how far they want to take it.