Bruno Major At The Bodega, Nottingham 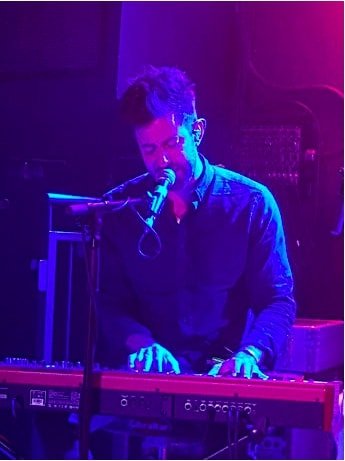 I first heard about Bruno Major through Kyle from Tyde (who we recently spoke to) and since that day I have been listening to his music pretty much non-stop. I have listened to him whilst strolling through Hyde Park and whilst catching the train and whenever else I have my headphones plugged into my ears. Tyde actually remixed one of his songs, ‘Cold Blood’.

Bruno Major is a highly talented singer-songwriter, and producer, who has just finished touring as the support act for Sam Smith on his massive tour. He then travelled to America and played shows there, before coming back to the UK to play his ‘A Song for Every Moon’ tour here.

On May 7, Bruno Major performed at The Bodega in Nottingham. It was a gloriously sunny Bank Holiday Monday (practically unheard of in England) so spirits were high and the gig was a lovely, relaxing way to end the day.

Eloise opened for Bruno and she is also a member of his band. Her voice was flawless. She performed around 4 songs; most of which were slow and drenched in heartbreak but others were more upbeat whilst also about ex-lovers. Eloise, in my opinion, was Bruno Major’s female counterpart. Their musical styles compliment each other wonderfully, so much so that they later performed a duet of ‘Second Time’ together.

Bruno came to the stage and seemed to be in a great mood. He thanked the audience for coming a number of times and was very grateful, especially as it was his first gig in Nottingham (but not his first time “getting pissed” at The Bodega). I imagine this must have been quite surreal.

In 2016, Bruno embarked on a project which evolved into the album, ‘A Song for Every Moon.’ Bruno spent an entire year, writing and recording a song every month for a year. He had thought of the concept because he felt that it would be possible to do this every month, every year for the rest of his life and wondered whether it would be possible or whether he would run out of ideas to write songs about. Luckily for us, he didn’t run out of ideas and a beautiful album was created.

The nice thing about the gig was that, in between songs, Bruno spoke about his inspirations behind the songs he had written. He played us “the first song he felt was good enough to play his mum” and also delved into a deeply personal story behind the song, ‘Places We Won’t Walk.’ After the song, he seemed quite emotional and I know I had tears in my eyes too.

That is the power of Bruno’s music. The words are emotive and his voice is stunning. His voice is blissful.

Another thing I really enjoyed was when performing live, Bruno and his band switched up some of the songs so that they were a little more upbeat or just different to what you were used to hearing.

Drake’s ‘Going Home’ was not a record I was expecting to hear Bruno sing but he performed it during the encore and it was so good and so much fun.

Going home was not something I was in a rush to do. The gig had seemed to fly by. And, afterwards, I was able to chat with Bruno at the bar. He was so lovely and listened to me gushing about how much I loved his music (pretty much like I am doing now).

Overall, it was a great night and I am very happy that I got to see one of my favourite R&B singers play live. It must be a good sign when you leave a gig and immediately play that artist’s songs on your phone. Yes, I am hooked and I can’t wait to go to the next show.