A Compelling & Haunting Voice Neonomora ‘Be Still, My Soul’. 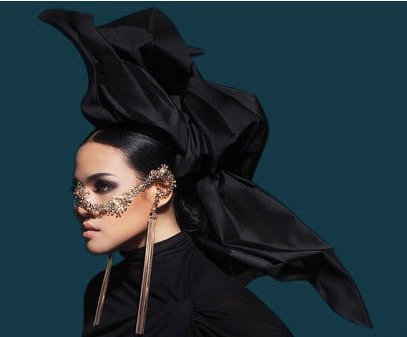 If Neonomora’s voice, songs and music videos don’t resonate deep within you then surely you can’t be alive and breathing. This Indonesian singer-songwriter is an incredibly captivating singer to watch develop on the music scene; her unique sound is all consuming. Although she has only been in the industry for a handful of years and still so young, Neonomora has been creating a buzz internationally, earning the title ‘Best Indonesian Album 2013’ for her self-titled debut EP by Rolling Stone Indonesia and ‘Breakthrough Artist of the Year’ from NET TV the following year.
Neonomora’s voice sounds worldly, powerful and sophisticated and it is, therefore, no surprise when she mentions artists such as Etta James and Aretha Franklin as music idols. Her songs and accompanying visuals tell a story and you will ponder on the sounds and music videos such as ‘Seeds’. ‘Sapphire (Phase I – The Passage Forms a Prelude to Phase II)’ and ‘Waters’ long after they have finished, realise a lot of time has passed and you are still sitting in a dream. You can’t put this music in a particular genre as it’s an intricate tapestry of folk, rock, electronic and soul with opulent production and instrumentals. These are just mere shadows to the spotlight of Neonomora’s rich voice.

Fresh from a recent trip to our great city of London which she loved. And on the week she launched her new video ‘Be Still, My Soul,’ we were fortunate to have Neonomora answer a few of our questions about her music, inspirations and how she spends a typical day. Enjoy.

Q. When and how did you know you wanted to pursue a career in music?
I think I’ve always known I wanted to be a singer since I was a kid, but within the past years when I was in the university, it was always a battle between wanting to embark in the music industry or being the creative person behind the screen. In 2012, nonetheless, when I came back to my hometown and meeting some of the people who have given me the strength to focus on my music, I resigned from my job by then and started to write songs for my debut SEEDS.

Q. How would you describe your music to new listeners?
When Whitney Houston and Arcade Fire had a baby, this probably would be it. Haha.

Q. What can you tell me about your new video?
So the video director Bagoes Tresna Adjie and I spent some time talking about my personal experience of being a musician since I first started as Neonomora. I went down to the memory lane where I had my first media interview, the interviewer was asking questions and whenever I replied, she went talking to her friend, she didn’t seem to want to be doing the interview, she probably looked down on me ‘cos I was perhaps considered as the underdog or an outcast. I was also once asked about my nationalism because I write songs in English – which I found quite irrelevant, but it certainly leaves a scar in me for being questioned that way. And some other obstacles I faced for having this as a career. I talked to Bagoes about performing a real athlete doing a real battle in the music video, ‘cos I thought the ones that can showcase some real struggles through their faces are athletes. You can see it clearly on their faces, the sadness when they lose, and the happiness when they win right on the battlefield; the rise and the fall. So I called this just-turned 17 Indonesian tennis player Joleta Budiman, we met and after spending probably half a day with her sharing her struggles and of course her triumphant as an athlete, we clicked right away and went for a shooting a few weeks after.

Q. What is your favourite aspect of the music industry?
To be able to be surrounded and work with creative talents every now and then.

Q. How do you go about writing your music and lyrics?
I like to reflect on the times, therefore some of my lyrics can be very political, like what I wrote for ‘The Man’. ‘The Man’ was talking about the political situation in Indonesia in 2014 during the Presidential election. When you go through the Indonesian history, where the people were oppressed by one greedy leader for over 32 years, you will understand what I was talking about in the song. Other times the lyrics can also be very personal; it involves love, loss, death, sacrifice and all that you can experience as a human being.

Q. Who or what influences your music-making process?
Michael Jackson has always been my biggest influence, not just the music, but the artistry and how he reflected the times. I also have to read poetries and illustrations before I start making music because these things trigger and motivate me so much in music making.

Q. Where is your favourite place to perform and why?
Probably in festivals, ‘cos you’ll get unexpected crowds and unexpected reactions from the crowds. But I always have this dream to perform in an abandoned church or a temple, I don’t know why, but I hope this dream will one day come true.

Q. What tracks or lyrics are most meaningful to you and why?
‘The Man’ is, I personally think most meaningful, ‘cos besides triggering people here, especially the youth to act themselves out there, it also let them understand you can do so much with music for a change.

Q. Tell me something people don’t know about you?
I am quite a shy person when you meet me in person, I can also be very awkward.

Q. What’s a typical day for Neonomora?
Probably a small rainfall accompanied by a glass of hot chocolate and a pile of poetry books and Etta James choons in the background.

Q. If you were not in music, what else do you think you would be doing?
I might have been a photographer, a graphic designer or an illustrator, maybe a poet, you’ll never know.

Q. Which up and coming music artists are you listening to at the moment?
I currently listen to Unknown Mortal Orchestra, like a lot. Ravi Shankar also, to get a meditative state of mind. Christine and The Queens, Son Lux, The Fusion Project, Elephant Kind, Bon Iver, Kendrick Lamar, Solange and Kanye West.

Q. What are your proudest achievements so far?
Well, as an independent musician, I’m just so grateful myself that I had been nominated for several awards over the past few years, but to me personally, having people to perceive that a female singer can as well be strong in her own imagery and opinions. And being accepted for my music without having to dress pretty and/or vulgar is something that I am utmost proud of.

Q. What are your biggest challenges?
Maybe to write for an EDM song, I’ve actually written a couple songs for EDM, but I think I still need to get a grip on it, ‘cos my songwriting is pretty much metaphorical and poetic, and I have to learn about having people to dance to my kind of songwriting.

Q. What are your plans for this year?
To launch my upcoming album, releasing a couple of music videos as well as having a single performance in the US and a tour in the UK. And oh, I’m doing a collaboration with London-based fashion designer Nelly Rose who will design my outfit for my upcoming performances which I’m excited about.