60s Rock And Roll From The Tomicks At Album Launch Review 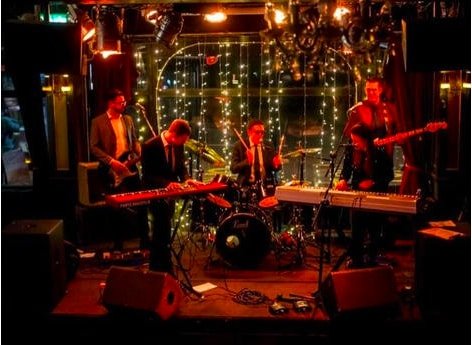 The Tomicks play 60s styled rock and roll with an infectious confidence and swagger. The band, most of them decked out in suits, looked to be having a good time. Their energy transferred to a very enthusiastic audience many of whom were up on their feet dancing by the end of the set. The band later added a tenor saxophonist and a trumpet player to their ranks, further filling out the sound in the room.

I found it to be fitting that a band so indebted to the 60s would play at a venue like The Troubadour, with a strong sense of history and an attachment to the era they are so fond of. The band paid tribute to their influences not only through the embodiment of them in their own songs but through playing a number of spirited covers of classics ranging from The Rolling Stones’ “Honky Tonk Woman” to The Beatles’ “Back In The USSR”. Drummer and singer Tom Cridland at one point told the audience of his love of John Lennon, but to me, his voice is more reminiscent of Paul McCartney, whom they also covered with a house storming rendition of “Live And Let Die”.

The Tomicks have a new self-titled album out which is available on CD and vinyl now. They will also be playing a number of shows in London over the course of the next six months.