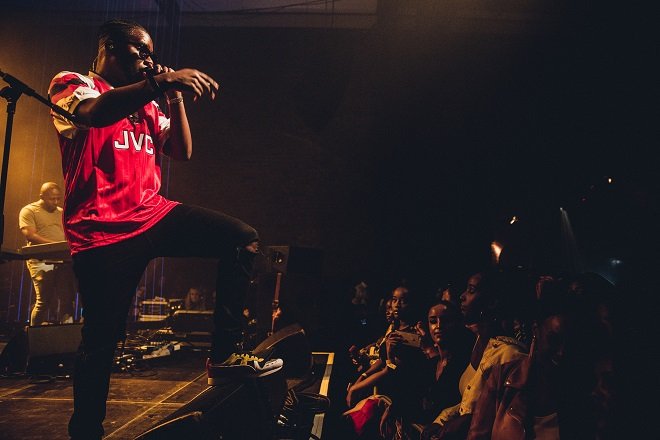 Neon Music had a hot ticket to the TIDAL x Arsenal event last night at Village Underground in East London, an intimate venue showcasing the best in live music.

British-Ghanian DJ and Producer Juls has been steadily rising with his own style and African music influences. He has collaborated with the likes of Stonebwoy, Nonso Amadi, Burna Boy, Kojey Radical, Not3s and more. Earlier this year he was added to the roster of playlist curators for TIDAL.

British-Nigerian Tidal Rising artist Maleek Berry has released hit after hit such as ‘Kontrol’, ‘Bend It’ and ‘Gimme Life’ and also worked with many prominent artists including Davido, Fuse ODG, Wizkid and Wale to name a few. He is also known for his Afrobeats / Afropop style; a sound dominating the Global music scene.

DJ Juls really warmed up the TIDAL X: Arsenal Rising Show and got the crowd pumped by playing his own music and tracks from Mr Eazi, Wizkid and American contemporaries such as Tyga and Lil’ Wayne. Maleek Berry followed with a live performance of his classic Afrobeats hits. The two artists channeled their love of music and passion for performance through to the crowd who were dancing, chanting along and enjoying every moment.