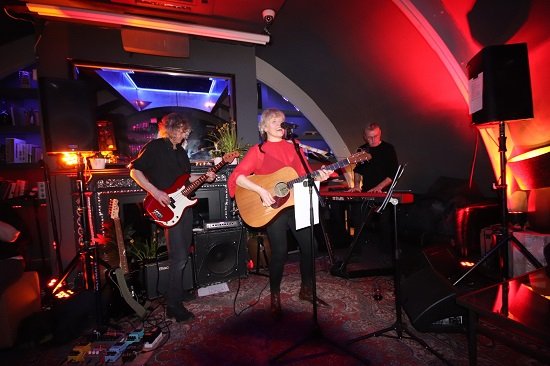 With its grand entryway and simple, elegant menu, London’s L’escargot provided the perfect venue for Sadie Jemmett’s showcase for her soon to be released album ‘Phoenix’. The night began with a relaxing dinner in one of their small and intimate private dining rooms before we were taken to the performance space to see Sadie and hear what her newest album had to offer.

Decked out with a selection of quaintly mismatched armchairs and sofas, and with an impressively domed glass ceiling, the performance room was a truly lovely space. The room, having been left to fill naturally, was soon called to attention by Sadie as she began her set. Sadie played through the album chronologically and so began with the beautifully sincere ‘Rescue Street’, and the dynamically emotional ‘Bitter’. Sadie next played ‘Don’t Silence Me’, the politically motivated and evocative track that will be the first single to be released from the album on March 8th (to coincide with International Women’s Day).

The song, with its powerful alignment with the #MeToo movement and the clear solidarity that it shows to victims of sexual assault, is a far cry from the calmer and seemingly more melancholy vibe of the rest of her musical catalogue – and shows the extent of Sadie’s flexibility and dexterity as an artist. Sadie prefixed the song with an explanation about its origin, explaining that the song was born when Sadie became aware that her good friend Mhairi Morrison had been assaulted by a notable French film director. This knowledge, along with the initial Weinstein allegations, galvanised Sadie and she realised she had to do something about it. The stridently pro-victim lyrics helps hammer home the song’s wonderful message, and the single is truly empowering.

The rest of Sadie’s performance was equally as captivating, with the highlights being an emotional rendition of ‘Leonards Waltz’ (a track written to commemorate her friend who was a huge fan of Leonard Cohen), and her final single ‘What You Give Will Come Back’ which closed the performance beautifully.

Make sure to listen to ‘Don’t Silence Me’ on March 8th, and stay tuned to hear the rest of this powerful and enthralling album.