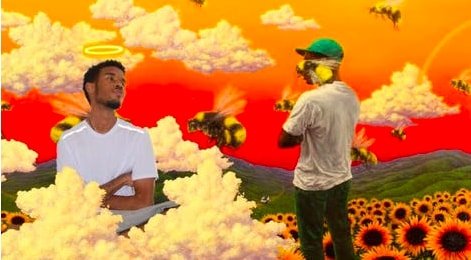 Since 2017 is over now I thought I might as well take a second to look back at my favourite album of the year, Tyler, The Creator’s ‘Flower Boy’. This album is an exploration of loneliness, longing and depression. It’s telling that physical editions of the album refer to Tyler, The Creator by his real name, Tyler Okonma, as it is a deeply personal record. It plays almost like a reading of a diary; the songs explore different aspects of the same underlying themes, building a complete picture of Tyler as a person and of how he feels about the world around him.

However, before we get onto Tyler himself, let’s talk a little about the music. The album features some absolutely gorgeous sonics and is easily one of the most beautiful hip-hop albums I have heard in a while. The music is a lush, summery blend of neo-soul and neo-psychedelia, full of arresting little details for your ears to enjoy (see for example the soulful piano outro to ‘Where This Flower Blooms’ or the layers of backing vocals in ‘Boredom’). The vibe of the whole thing is just wonderful really, sun-drenched and tranquil with an undercurrent of wistfulness, like a balmy afternoon in the last few days summer. Tyler’s skills as a producer have come a very long way – his synths have lost the cheap, plasticky vibe they once had and now sound rich and full, and he takes his samples from a fascinatingly eclectic range of sources including both a piece of traditional Arabic belly dancing music (‘I Ain’t Got Time!’) and a Sonic Youth remix of Can’s ‘Spoon’ (‘Foreword’).

What’s really striking, and endearing, about ‘Flower Boy’, however, is its emotional honesty. Prior to this record Tyler, The Creator has made his name as a shock value act in a similar vein to someone like Eminem; yes he could be contemplative at times but for the most part, his M.O. has been to offend and discomfort with material that is frequently unapologetically crass and obnoxious. On this latest album, however, the Edgelord act has been dropped almost completely. The Tyler, The Creator that we hear here is thoughtful, introspective and sincere. The music (with the exceptions of ‘Who Dat Boy’ and ‘I Ain’t Got Time!’, both of which are quality bangers that provide a welcome burst of energy) is mellow and low-key and the lyrics aim not for controversy but for genuine self-expression.

There lies at the heart of ‘Flower Boy’ a deep sense of longing, a yearning for companionship which is expressed with pathos and maturity. This, of course, includes romantic longing, as seen on the heartrendingly beautiful ‘See You Again’ or ‘Glitter’, a jubilant confession of love that sounds like the audio equivalent of Tyler standing in your yard with a boombox and a bouquet of flowers. Tyler’s longing, however, is not limited to crushes, as he also explores other less giddy and more complicated emotions. Tyler has recently come out, and his longing to openly express his sexuality permeates the record. This can be seen in its title – ‘Flower Boy’, an allegory of sorts for Tyler’s queer identity, or in the many ways that nature is used as a metaphor for his sexuality, and his suppression of it, throughout. On ‘Foreword’, for example, he muses “See I was never into the beaches and all the sands / See I was in the woods with flowers, rainbows and posies falling out of my pocket”.

Nowhere is this more obvious than on ‘Garden Shed’, the album’s centrepiece. The song is a coming out song of sorts; a slow-burning piece of psychedelic soul that simmers with stifled emotion. Its soaring guitars and ethereal vocalisations culminate in a fiery burst of distortion; a passionate moment of release that gives way to Tyler finally letting go with a stream of consciousness spilling of feelings. His verse feels cathartic not only because of the instrumental buildup that precedes it but because of the way he runs through the words as if he has been waiting his whole life for the chance to say them. “Truth is since a youth kid, thought it was a phase / Thought it’d be like the phrase “poof,” gone / But it’s still going on” he tells us, before going on to say “A couple butterflies wanna float / But I was always like “Eh” / Barely interested but I bagged / Just to brag to my boys like ‘Bruh’”. Here Tyler is painting a picture of a lifetime’s worth of longing for both acceptance and sexual freedom, and his words carry with them a powerful feeling of release.

Different kinds of longing are present throughout most of ‘Flower Boy’. On ‘Foreword’ Tyler longs for a sense of purpose that goes beyond materialism (“How many cars can I buy till I run out of drive?”), and on ‘November’ he longs to be taken back to a simpler time in his past when was he was happier and less confused. These are, for me and I imagine for a lot of people, very relatable emotions. Here, Tyler, The Creator, a ‘millennial’ rapper if ever there was one, captures the emotional zeitgeist of an entire generation; dreams that fail to materialise, frustration, uncertainty and a longing for real human connection that isn’t facilitated by phones and laptop screens. We all long for meaning, happiness and stability and we all find ourselves lost sometimes. Tyler, The Creator understands this because he feels the same way. What he has done here is to articulate these feelings in a way that is relatable whilst still feeling very personal. However, whilst the album is full of sad emotions it expresses them in a manner that is incredibly warm, human and positive. The record bows out with a bright, buoyant instrumental named ‘Enjoy Right Now, Today’; a subtle but powerful ending that suggests that we could all use some time to step back, self-reflect and find happiness in the moment.

So ‘Flower Boy’ is a poignant, mature statement from someone who I would never have expected to record such a piece of work. I’m not going to lie, I have never been a Tyler, The Creator fan at all, and if someone had told me a year ago that my album of 2017 was going to be by him I would have been extremely sceptical. As things have turned out he has made an album that is not only very good but really rather special, one that has come to mean something to me. With ‘Flower Boy’, Tyler has exceeded expectations in every possible way, and you would be hard pushed to find a more rich and rewarding album from 2017.