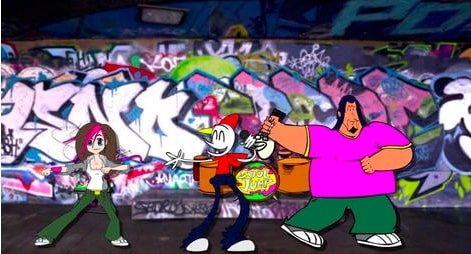 Soul Jump is the world’s first kid’s animated virtual band with infectiously funny characters with heart, who entertain the whole family by performing catchy melodies with their own style of funky urban pop music. The band lives their life through a vibrant mixture of animation, music and comedy.

Martyn Niman, founder, producer & performer of Soul Jump says, “The funky and super melodic band will play soulful pop music, with big vocal harmonies, including 14 live original songs, against neon animated music videos. The real-life performances will be mixed into the songs on screen and in between the songs are real-life comedy sketches of the Soul Jump characters. This original type of entertainment creates a whole new experience for children & families like never before”.

Soul Jump will be performing live at Elstree Studios, Shenley Road, Borehamwood, WD61JG, on Thursday 25th January at 7.30pm. At this exciting launch show, you will be able to see real-life performers sing and voice act, whilst interacting with their animated cartoon counterparts. The onscreen cartoons come to life through the real-life performers, creating a whole new dimension of audiovisual entertainment.

Why don’t you be part of Soul Jump’s animated journey for a visually spectacular show? Find out more and book. 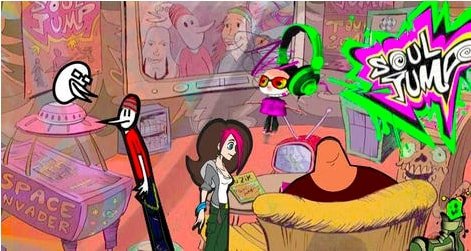 Martyn Niman founder, producer & performer of Soul Jump has given us an exclusive interview about the band and the launch show this month:

How did the idea for Soul Jump come about?
I created comics growing up and over the years they developed into a cartoon series. I started writing songs around the same time and thought maybe these characters from my comics could form a band. I started experimenting and they eventually turned into Soul Jump

Tell me about Soul Jump and the characters in the band?
Ricky is the frontman of the band and his big dream is to get his music off the ground. Sometimes he’s a bit in a dream world and leads the others into precarious situations but he means well.

Colin is the cynical drummer of the band and was Ricky’s best friend growing up and often puts doubts in Ricky’s mind but secretly looks up to him.

Jerakim is the rap artist of the band. He is a big loveable loon and complete party animal.

Joy is a funky hippy; the female vocalist of the group who often makes things happen. Whereas Ricky will think about ordering a pizza, Joy will actually order the pizza.

Rickelle is Ricky’s younger sister who is going through an emo phase, trying it out but she still likes jelly and ice cream. She acts a bit cool and is the rock chick in the band.

DJ Sketch is a mysterious type of DJ who is the technology wiz in the band and often disappears when you least expect it usually cos his mum needs him to do his homework.

Do the characters represent real people you know?
Yes, they are loosely based on myself and my friends – Ricky is based on me in many ways, he’s quite an excitable, energetic guy that’s rushing around full of ideas and creativity who writes songs about all kinds of stuff. Sometimes he trips up on himself but he has a heart of gold.

Have you been inspired by particular cartoons/comics?
I was inspired by the Simpsons growing up, more recently shows on cartoon network like ‘Adventure Time’ and ‘Regular Show’. I am also a big Seinfeld fan; the ensemble in the show is inspired by my favourite comedy ensembles like those shows.

What kind of music does Soul Jump play?
It’s melodic funky music, basically a little bit of a cross between The Black Eyed Peas and a Michael Jackson kind of sound. It’s slightly different though as we have our own sound. It’s catchy, sometimes spiritual, sometimes silly with a cartoony-ness to the music

Are there any musical influences?
Michael Jackson growing up and how you have these big epic songs which can be really catchy one minute, really meaningful the next with big messages. More recently Bastille; I really like the sound of that band. Any music that’s really good  – I listen to all sorts from Rap, hip-hop, RnB and soul

What can viewers expect from the live launch show on January 25th?
Viewers can expect a real mixture of very uptempo funky melodic music with lots of comedic animations, entertaining humorous animations in between the songs and mixed in with the songs, colourful neon cartoons on big screens behind 6 vocal performers, lots of vocal harmonies in the group. It will be a real audiovisual adventure

Tell me about the animated series?
The series itself is almost a bit like the Flight of the Concords meets Friends in some ways. An ensemble of characters who live with each other living in a live-action world where they are all getting by living their lives trying to pay rent and at the same time get their music off the ground. They are in competition with another band called Boys For Girls, a cloned boy band and there is a record label Pistachio records where Miss Pistachio is going to sign one of the bands – battle of the bands. The humour comes from Ricky writing songs about silly stuff.

Martyn, you started Soul Jump and produce, direct and perform – what is your music background? What made you decide to set up an animated band for children as opposed to adults?
I have always been a big animation buff. I started an animation studio after my animation degree. I have always written songs, but was restricted at school and didn’t learn instruments. I also had a band with my brother.

I have 4 children and am surprised by how many songs on the charts are not appropriate for children. They are usually about sex and not very positive. There are lots of songs which can be dark and depressing and I’d like to do something meaningful, empowering and positive for the whole family, not just children. Where people of all ages can enjoy music that can have big messages and be really positive

What message are you hoping to get across to your viewers through Soul Jump?
Self-belief is a central thing. Following your dreams and what you really love to do. Sometimes there is a lot of negative energy around us; many people don’t think you can pursue your talents in life. A lot of the music is to empower you to pursue your passions and it’s also about friendship. The songs are about faith and there is a lot of comedy and good fun too.

What’s next for Soul Jump?
This is a big launch show, but we would like to do loads more gigs, get signed with a record label and launch our own animated series on TV and Netflix.