The Tomorrow That Never Was: Japanese Iconography in Vaporwave 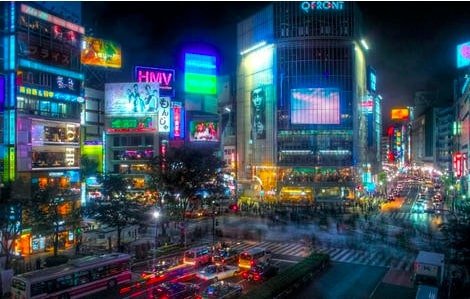 Since the 1980s, Japanese media culture has spread into the United States and Europe with ever-increasing visibility in popular culture. Aided by the internet, what began as a creeping influence became a huge phenomenon in the 21st century, producing some notable appropriations of Japanese culture in recent pop music: Gwen Stefani’s entourage of Harajuku girls, Katy Perry wearing geisha attire at the 2013 AMA’s, and Avril Lavigne bouncing around in a cupcake skirt through candy stores and sushi bars in ‘Hello Kitty.’ Amidst the crude mainstream representations of ‘Cool Japan,’ a subtler form of influence emerged in 2011 from the murky undergrowth of online communities like Bandcamp, Soundcloud, Last.fm and 4chan. Relying heavily on samples from 1980s and 90s lounge, smooth jazz and Muzak, producers such as James Ferraro, Daniel Lopatin, and Vektroid (Ramona Xavier) pioneered a genre created and consumed by a largely anonymous clique of internet citizens with a shared appreciation for hypnagogic music and an ambivalent attitude towards consumer capitalism, globalisation, and manufactured nostalgia.

The uniqueness of vaporwave’s appropriation of Japanese iconography lies in the simultaneously overt and covert ways in which it plunders cultural references. It’s overt because the genre is completely saturated with Japanese imagery and writing, often presented in a heavy-handed and blatantly tactless way. Images of hazy Tokyo skylines on album artwork and inscrutable names riddled with Japanese kanji that allude to pseudo-corporate brands and marketing jargon – e.g. “情報デスクVIRTUAL” (“Information Desk VIRTUAL”) – are well-worn clichés of vaporwave’s super-stylised ~~ a e s t h e t i c ~~. Yet, despite the explicit, overt nature of its presentation, vaporwave’s appropriation of Japan still feels covert in the way that it’s woven into the genre’s visual aesthetics alongside a multitude of other seemingly haphazard tropes: glitch art, Renaissance sculptures, late 1990s web design and cyberpunk aesthetics (think of the iconic album cover for Macintosh Plus’ 2011 album Floral Shoppe, practically the poster child for vaporwave). In relation to these images, Japanese iconography is just another random ingredient thrown into the bizarre melting pot of vaporwave art, a surrealist bricolage of nostalgic junk designed to accompany repetitive and disorientating music that, like its visuals, is obsessed with appropriating the past.

However, the fascination with Japan amounts to more than just a deliberately awkward amalgamation of visual tropes for shock/confusion factor. It has its roots in centuries of Orientalism, of the West viewing the East as a source of cultural curiosity, artistic inspiration and exotic fantasy. As Richard Taruskin says, Orientalism means viewing the East as “a sign or metaphor, as imaginary geography, as historical fiction, as the reduced and totalized other against which we construct our (not less reduced and totalized) sense of ourselves.” In a way, the “Japanese-ness” of vaporwave is just late-19th century Japonism repackaged and updated for the digital, modern age. Just as ukiyo-e (Japanese woodblock prints) transformed Impressionist art in the 1860s and influenced the music of Claude Debussy in the early-20th century, modern Japanese youth culture, including J-pop, manga, anime, fashion, film, consumer electronics, architecture, and cuisine, has and continues to impact the West to an incalculable degree. Regardless of era, artists always love taking inspiration from culturally and geographically remote places; it lets you recontextualize foreign (often archaic) ideas in a way that feels fresh and modern while allowing enough distance to be emotionally forthright without being too direct. Artistic sensibilities change over the years, but perceptions of Japan today still emphasise its “otherness,” the most bizarre, vibrant and enigmatic aspects of its culture, in the same way, that was being done in the late-1800s, when Parisians staged japoneries that featured models dressed in kimonos and the conspicuous display of oriental props. A living, breathing landscape reduced to a timeless, abstract and semi-fictional geography.

In the case of vaporwave, a genre preoccupied with escapism, memory, and nostalgia, modern Japan perfectly embodies that tension between strangeness and familiarity, old and new, reality and artificiality that vaporwave artists strive to create. The programme note for the 2014 album HIRAETH by 猫シ Corp. (“Cat System Corp.”) states: “Hiraeth: a homesickness for a home to which you cannot return, a home which maybe never was; the nostalgia, the yearning, the grief for the lost places of your past.” Ghostly atmospheres pervade the album; slowed-down and reverberated city pop (Japanese 80s disco) sounds as if blared out from speakers in an abandoned shopping mall, evoking the feeling of being alone in a vast, open space. Ambient, droning synths linger ominously on several tracks. In “Eden Transit” a soothing Japanese woman’s voice delivers automated train announcements against an ambient backdrop of rainforest sounds (birds, waterfalls etc.). Like those dreams you have that feel weirdly vivid and specific when you’re there in the moment, yet upon waking you realise make no sense, the familiar strangeness of HIRAETH simultaneously lures you in and leaves you feeling alienated – seduced and disorientated by its delicious dream-like surrealness.

The aural discombobulation of vaporwave’s chopped and screwed techniques works hand in hand with imagery and language intended to distort the listener’s sense of time and place. Robin Burnett, the artist behind INTERNET CLUB, says “a lot of music in the genre reminds me of fogged-out environments – places where everything is obfuscated and uncertain”, and adds that it’s “based on uncertainty and sometimes even dread”. The album artwork for VANISHING VISION, an album officially set to be released in the future (November 2036), despite having already been released a few years ago (a true Schrödinger-like paradox), features a fuzzy neo-noir anime depiction of a rainy night in Tokyo with neon-lit street adverts. Blade Runner-esque images like these are ubiquitous in vaporwave, it’s a nostalgic, humorous and retrofuturistic way of reviving early cyberpunk aesthetic. Idealised images of Tokyo from the 1980s and early 1990s evoke nostalgia for a time of forward-looking hope and excitement over Japan’s emergent status as an economic superpower. Following Japan’s post-war economic miracle, U.S. science fiction, convinced by the country’s seemingly assured ascendance, envisioned a future based on the Japan of the 1980s: cool, sleek and shiny neon-drenched cityscapes, disorganised and hyper-urbanised futuristic metropolises with incredible technological sophistication. William Gibson, the noir prophet of cyberpunk and author of Neuromancer, summarized this sentiment when he remarked that “modern Japan simply was cyberpunk. The Japanese themselves knew it and delighted in it.”

Three years prior to the making of his expressionist sci-fi epic, Metropolis, Fritz Lang visited New York in 1924. His description of the city matches that of Tokyo in the 1980s: “the buildings seemed to be a vertical sail, scintillating and very light, a luxurious backdrop, suspended in the dark sky to dazzle, distract and hypnotize.” In fact, Lang’s description perfectly evokes the album artwork for 新しい日の誕生 (“Birth of a New Day”) by 2814: a mysterious neo-noir landscape with skyscraper silhouettes ominously suspended against an oppressive backdrop of dark-purple haze. Gaudy, neon-lit banners designed to “dazzle, distract and hypnotise” crowd the foreground but their Japanese text estranges the viewer.
Like the artwork, the music feels cold and impersonal, infused with nihilistic uncertainty and dread. 新しい日の誕生 is a meditation on the alienating and isolating nature of existence in a bustling, Southeast Asian megalopolis. Considering how in the 1990s Japan entered a devastating recession and spent an entire “lost decade” mired in stagnation, and how since then a growing number of Western economists have been pointing to Japan as a dark vision of the future, the use of Japanese iconography in both dystopian cyberpunk fiction and vaporwave albums like 新しい日の誕生 is fitting (even Metropolis contains a reference to Japan: the name of the Yoshiwara club alludes to the famous red-light district of Tokyo). Since the 1990s, the once-optimistic image of Japan as a future economic superpower has gradually been replaced by one of creeping irrelevance, a vanishing vision of a technological utopia.

It’s often noted how vaporwave uses the language of pseudo-corporate marketing jargon and the music of looped and distorted Muzak samples to create a kind of deadpan critique of consumer capitalism, but what’s interesting is how these anti-consumerist attitudes tie into the genre’s Japanese influences. Japan has always excelled at appropriating American/Western culture – be it music, clothes, language, food or lifestyle – and putting a unique spin on it. Japanese advertising is no different; it often adopts elements of American consumer culture and takes it to extreme lengths, distorting it like a carnival funhouse mirror. It’s apparent in everything from Japanese TV  commercials, which are eccentric, fast-paced and jingle-heavy, to the cluttered, disorganised and disorientating aisles and shelves of Don Quijote, Japan’s largest discount chain store. It’s “pile ‘em high, sell ‘em cheap” on steroids, accompanied by the store’s theme song, “Miracle Shopping,” played on a continuous 24-hour loop, subliminally beckoning you with peculiar lyrics like, “Let’s buy a dream that overflows with a boom,” and “A paradise where the fastest wins … Even by impulse, you got it, right?” It’s excessive and bizarre, but it’s by no means new, as producer New Dreams Ltd. said in a recent interview, “there is a big undertone of surrealism to everything that was going on at the time [in the 1980s], especially in Japan … The lengths people went to in advertising, even then, is shocking to me.

Shopping malls, those shiny, marble-decorated palaces of consumerism that have inspired countless vaporwave albums like Palm Mall by 猫 シ Corp. (and spawned an entire subgenre known as mallsoft), seem to come dangerously close to resembling their fictional counterparts in Japan: one of the largest malls in Hiroshima, for instance, was formally called Diamond City. The sense of utopian promise behind a name like that – of consumer paradise, pearly gates, marble fountains and escalator stairs to heaven – and the inevitable falsehood behind its message – that we ought to seek spiritual and ego satisfaction in material consumption – is what fascinates artists like Robin Burnett, aka INTERNET CLUB. In an interview a few years ago, Burnett explained that due to how capitalist society has encouraged an “infinite generation of ideals as shown through commodities,” he views society as “entering a hyperreal state.” In some ways then, vaporwave’s undertone of surrealism, its desire to explore the rift between reality and fiction, derives from the inherent tension buried within consumer capitalism’s false promise of happiness, a tension often elevated to dizzyingly absurd heights through Japan’s hyper-consumerist tendencies.

In William Gibson’s 1981 novel, The Gernsback Continuum, a photojournalist collects images for a coffee table book he plans to call The Airstream Futuropolis: The Tomorrow That Never Was. Although based on how Americans in the 1930s and 1940s imagined the future, the book’s title offers a poignant reference to an alternative vision of the future, that of 21st century Japan, as seen through the optimistic lens of 1980s American sci-fi. While vaporwave does use Japanese iconography to convey ambiguity and disorientation, its nostalgic references to a now-defunct vision of Japanese society evoke a pathos, a sense of yearning for something unattainable, which strikes at the emotional core of the genre’s identity. Like the SYLLABUS song “memories on the horizon,” vaporwave’s Japan is a glorification of a past that never existed and a future that will never come – the tomorrow that never was.