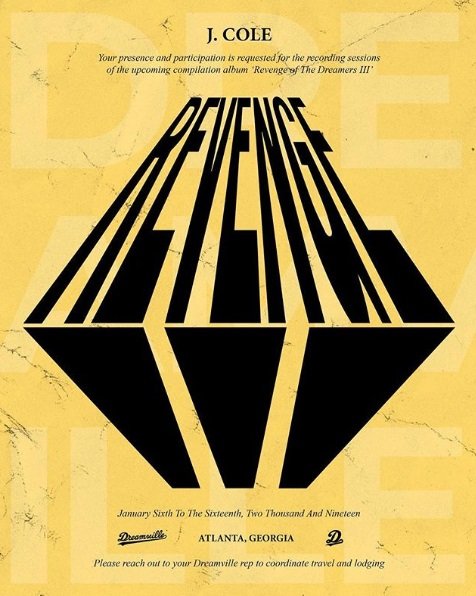 On the outro to JID’s song ‘Workin Out’ Zack Fox called on J. Cole to “spend some of that Dreamville money”. Now at the start of 2019 Cole, rapper and head of the record label, Dreamville is doing just that, but not in the club as Fox intended. J. Cole and his roster of marquee talent from the label including; J.I.D, Bas, Cozz, Ari Lennox and Earthgang have locked themselves in the studio in Atlanta for ten days (from the 6th of Jan to the 16th) to create the third instalment of ‘Revenge of the Dreamers’ (ROTD3).

Dreamville dominated 2018 with a host of incredible releases includes Coles #1 album ‘KOD’, J.I.D’s breakthrough ‘DiCaprio 2’, Bas’s ‘Milky Way’ and Cozz with ‘Effected.’ Along with well-received EP’s from Earthgang and Lute. 2019 is already shaping up to be a good year for the label with album releases expected from Cole, Earthgang and the emerging star songstress Ari Lennox.

ROTD3 may steal the show right at the start of the year. The difference between the third instalment and the last collaborative efforts is that the project has expanded from a wholly in-house effort to an epic collaboration between Dreamville and many of the most talented in the game right now. J. Cole is playing the role of the Willy Wonka of rap sending out invites to the lucky few who get to enter the wonderland that is that Atlanta studio right now. Producers, Rappers, and Singers are being reached out to through these golden tickets being posted online.

So far some of the artists confirmed in the camp are; 6lack, Saba, Vince Staples, Isiah Rashard, Reason, and Big Krit. Additionally many big name producers responsible for raps biggest hits over the last few years and in attendance including; T-Minus, Tay Keith, !llmind, Monte Booker and Childish Major. Reports coming out the camp is that the inspiration is overflowing and there is a real feeling something quite spectacular might be happening. Producers are playing their hardest beats and rappers are writing their best rhymes. With J. Cole admitting to shedding tears over what he is writing.

It may seem like a potentially dangerously competitive atmosphere, but reports are it is completely egoless with everyone interacting and bouncing off each other’s creativity. The artists appear to have realised what they are developing is bigger than individual performances. The mix of styles, approaches, and talent bring endless possibilities for what ROTD3 may become. See the photo album of the photographer Chase Fade inside the studio.

Naturally, all this promotion has led to an incredible amount of hype and expectation for the album, it is expected to drop relatively soon after completion of the sessions. In the unlikely event it falls flat it would be crippling disappointing. If they get it right it has the potential to be an instant classic and act as a flag bearer for this era of rap. In the meantime, I heavily recommend checking out all the individual artists involved and keeping up with all the latest developments of the camp on social media.