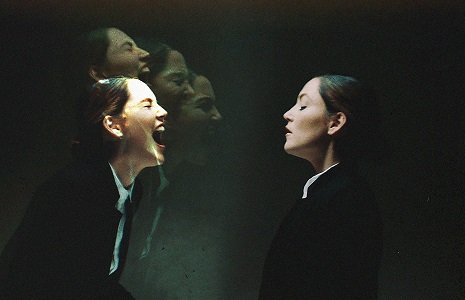 Saint Clair’s emotive ‘I’ll Stay’ is one powerful song. Having worked as a session musician, she “always knew [she] wanted to do her own thing“. We caught up with the London-based singer-songwriter (born Emma Topolski) to discuss what her songs mean to her and what the future has in store.

‘I’ll Stay’ is about “battling your inner-demons and trying to keep insatiable urges at bay,” Saint Clair tells us when asked what her moving song is about. “I was watching someone I love to destroy the things most precious to them so the song became a rallying cry of defiance and support,” she goes on to elaborate.

The video which accompanies the song sees Saint Clair express a violent side. She describes it as “American Psycho meets Fight Club” as the protagonist grapple[s] with the pressures of London corporate life. And you can see why! We see her strangling co-workers and beating others over the head with an Apple MacBook – or at least wanting to.

Was it fun to make? “The music video for ‘I’ll Stay’ was an exceptional experience. We assembled the most amazing group of people and ended up with more of a short film than a music video. Director Jamie Delaney and I wanted to portray a character’s struggle“.

Saint Clair is very supportive of mental health issues and on World Mental Health Day last month, she tweeted that “we need a mental health revolution“. In regards to this, she said, “I think we’ve come a long way and are definitely moving in the right direction when it comes to discussing and understanding mental health; the difference between my Dad’s generation and my brothers are worlds apart. However, I’m painfully aware that I’m part of a tiny bubble of sensitive, emotionally-aware creatives who generally feel at liberty to share how they’re feeling and seek help. We need to make sure support and awareness reach everyone, especially those most at risk“.

Band of the moment CHILDCARE has collaborated with Saint Clair and the outcome has been a remix of ‘I’ll Stay’. We asked how the remix came about, “I play bass in CHILDCARE (plus they’re my best friends) so it would’ve been weird and rude for them not to oblige. Ed, the lead singer, is a very talented musician and writer and has always enjoyed remixing other people’s music so wanted to get his grubby mitts on my stuff; I love the result“.

The result is absolutely beautiful. Will we hear it live any time soon? “Nothing live in the pipeline at the moment,” which is a shame, but as the saying goes every cloud has a silver lining, because we can expect new music as she is “busy planning a mini-album for next year. It’ll be an audio/visual collaboration between me and my sister (an actor/director), exploring the different elements of grief and loss“.
We can’t wait for it.

Saint Clair kindly compiled a list of some of her favourite songs for us of “Sad Songs That Might Make You Cry But You Feel Better For It Afterwards“.