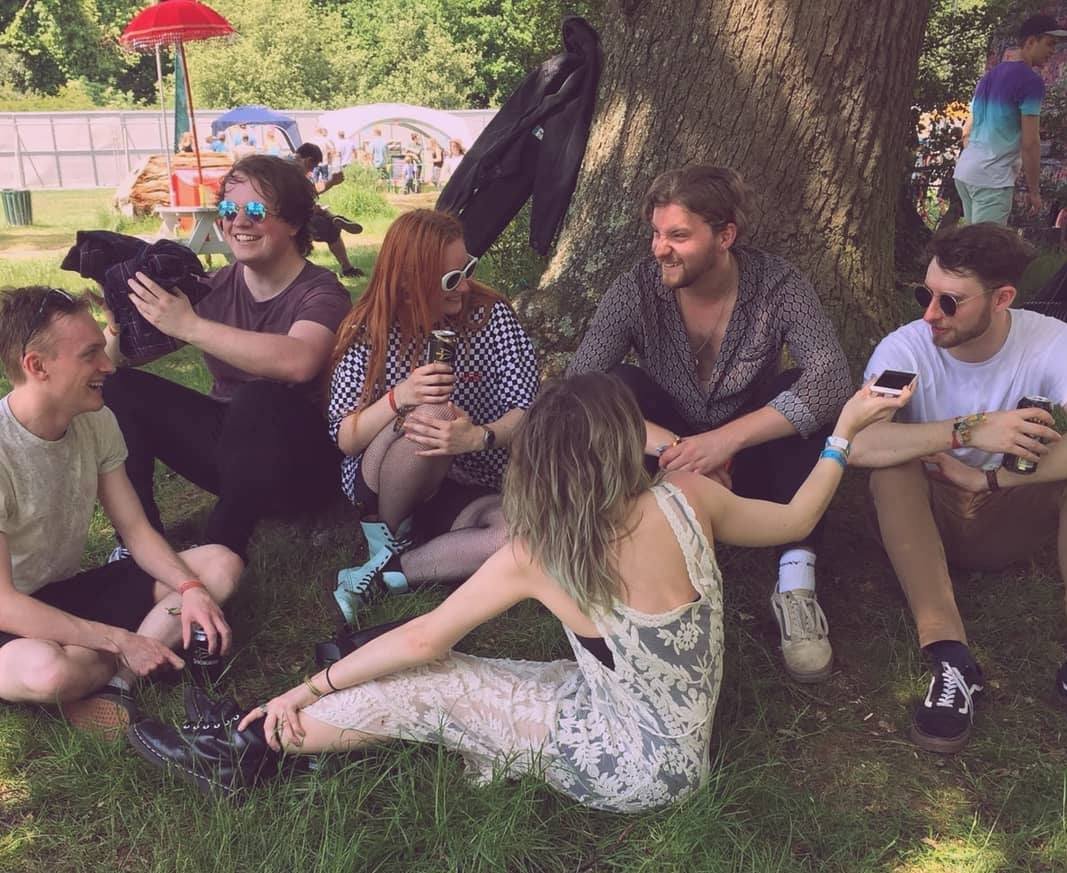 I managed to catch Djuno before their performance at Common People on Sunday. Seeing as I had five minutes with the five members, I asked them five quick-fire questions about their time at the festival.

Abbie: What’s happening guys? So, I’ve got five questions – one for each of you before you go on stage today. Let’s go, keeping it simple at first, Matt – how are you today? You feeling good?

Matt: I’m great! Excited to be here, how are you?

Abbie: I’m good, loving the sun! So, Pete – once your set is over where will you be headed?

Pete: All around really, I wanna see more sweet music!

Matt: To the beer tent!

Abbie: Sounds like the perfect day to me guys. Andy, here’s one for you. What’s your favourite festival food?

Andy: I haven’t had a whole lot today to speak of, but I just had a pretty good hot dog – so let’s go with that.

Abbie: There is so much food here to choose from, it’s a tough one! Right, Courtney – tell me about your outfit, I love it! Was it hard finding a look for your first festival show?

Courtney: I literally had to go through my entire wardrobe, but then I decided to go with this big t-shirt…. Oh and these funky shades.

Abbie: They are pretty funky. Okay, last one now with Sim! Now…. Is it true, that you really are the coolest member of the band?

DJUNO shortly went on to perform their set on the Uncommon Stage. The blue tint in the tent added to the atmospheric and powerful music. The band opened with Thin Ice, a new track the band have been working on. The energy inside that tent was insane, and DJUNO didn’t let the immense heat stop them from putting on a show. A mixture of old and new songs, with the band performing their own ‘classic’ Stop, which got the crowd singing along. Courtney led the crowd with her stylish vocals, and despite it being their first time on a festival stage – the band looked right at home taking the crowd on a Djuno journey.

Later on, after their set I found DJUNO cooling down under a tree in the GRAFFITI / ART AREA at the festival. They all looked happy and rightly so, they smashed it!

Abbie: Fantastic set! How was that for your first festival experience guys?

Courtney: Yeah we kicked it off in style!

Sim: Has someone said exhilarating?

Abbie: Oooh, that’s one of your tracks isn’t it?

Courtney: Yeah, it’s nice because I grew up in Southampton – so to play at something like this is really cool.

Andy: Hopefully first of many!

Abbie: What comes next for Djuno then?

Courtney: It begins with an A….

Matt: Its named after you isn’t it?

I wasn’t sure what they meant. They started saying Abbie to me a few times.

Abbie: Wait…. Are you guys going to Abbey Road?

Sim: It is SO exciting.

Courtney: It’s going to be insane, so surreal. Then after, there will be a little video.

Abbie: I can’t wait to see all of that, you’ve been working on some new tracks lately too haven’t you? Well, I’m going to let you guys relax, any last words until we meet again?

Andy: Don’t forget, time is an irrelative concept so keep that in mind.

And with that, the Djuno gang went to paint the cardboard castle in the sunshine, enjoying a well-deserved festival chill out.

Find out more about Djuno here.