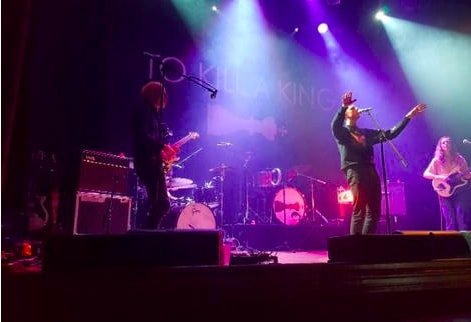 After queuing for 3 hours outside Islington Assembly Hall on a freezing Saturday evening, I found myself at the barrier (yay!) for what turned out to be one of the best gigs I had ever been to. “And which gig was this?”, might you well ask? To Kill A King were in London for the final show of their UK tour, accompanied by Childcare and Fours. Dan and Kyle from Bastille even joined them on stage at one point for a special cover of ‘Choices’.

To Kill A King have been away for a couple of years; writing and recording their new album, The Spiritual Dark Age. Now that the album has been released, Ralph, Grant, Ben, Josh and James have taken their new music on tour across the UK and will be touring Germany in March 2018.

The gig at Islington Assembly Hall in London was a chance to really celebrate the new album with their fans.

‘Fours’ kicked off the show with performances of their dance-pop songs, such as the soulful ‘Tell Me in the Morning’. The lead singer, Edith Violet, has a stunning and powerful voice which is one to look out for.

Childcare took to the stage next with their energetic, catchy punk-rock sound. They played ‘Omega Grey and ‘Film Club’ among others. Frontman, Ed Cares, clearly loved being on stage and encouraged the crowd to participate further. He could be seen yelling “C’mon!” at the audience in a way that only he could do. Ed later told me Islington had been his favourite show of the tour. (His second and third favourites were Southampton and Nottingham if you’re interested).

Of course, who else could it be next but the band that everyone had been waiting for- To Kill A King! They were loud! They were very loud! They were also great. The five-piece had fun and everyone in the audience was having fun too. Frontman Ralph mentioned once or twice that the band had a new album out and he said it “warmed his heart” to see people singing lyrics from the new record, especially since it had only been out a few weeks. The energy in the venue was electric during songs like ‘I Used To Work Here’ and their next single ‘No More Love Songs’ and then there was a more mellow moment when To Kill A King performed some of their older, more romantic songs, such as ‘I Work Nights and You Work Days’.