Coldplay’s Rise To Fame In ‘A Head Full Of Dreams’ 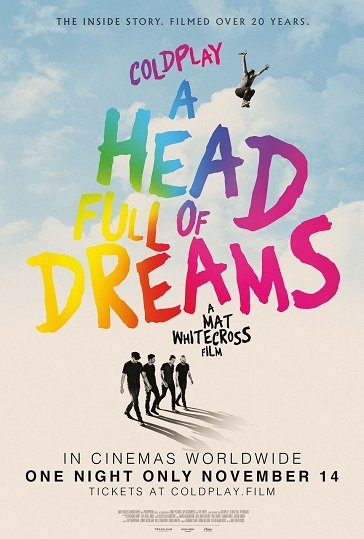 On Wednesday 14th November, Coldplay showcased their documentary Coldplay ‘A Head Full Of Dreams’ for a one night only showing of their kaleidoscopic twenty years together as a band in collaboration with Flow Alkaline Spring Water.

I went to the Leicester Square screening in London which was one of the two thousand global cinemas showing the documentary . It is directed by Mat Whitecross who met the band before they formed and who also directed the Oasis Documentary – ‘Oasis Supersonic’. The film captures Coldplay’s true story from their first rehearsal in a cramped student bedroom to the rest of their colourful 20 year history. Providing a glimpse into the reality of the natural friendship and brotherhood behind the music – the footage is set across the seven albums between the sold-out stadium shows and archives of behind the scenes footage in taxis and university bedrooms.

Having followed Coldplay’s evolution from across the years; I found the documentary a personal and nostalgic journey that catapulted the emotions of following your dreams. Presenting the film in such an intimate way reminds us that the band are humans like the rest of us, people who pursued their dreams and did it with belief, hard work and at some points a humorous tough temper.

A Head Full Of Dreams will be available to stream exclusively on Amazon Prime Video starting in the U.S., U.K., Australia and New Zealand on Friday, November 16th.