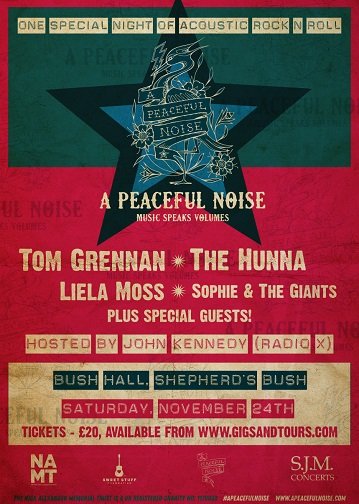 Last weekend proved that music will always have the power to push change and remember as artists including, Tom Grennan, The Hunna, Danny Goffey, Liela Moss and Sophie & The Giants took to the Bush Hall stage in London’s, Shepherds Bush. A Peaceful Noise is the name of the charity event hosted by John Kennedy and organised by the family of Nick Alexander, the British merchandise manager, who was sadly one of the victims of the Paris terrorist attack at the Bataclan concert hall in 2015.

With each of the musicians of the evening playing with a stripped back line-up, Sophie & The Giants were a perfect introduction to the evening with a dynamic performance that was both melancholic and feisty. Leila Moss provided a more contemporary showcase that was reflected by her showmanship on stage amongst a strings player with a shaker in hand. The Hunna brought their own ravenous sound as lead vocalist Ryan Potter broke hearts with emotional stripped back versions of the songs that many members of the crowd definitely knew and loved.

Not only did the evening include a special guest appearance from indie legend Danny Goffey,renowned musician, perhaps best known as the drummer and backing vocalist in band Supergrass but headliner Tom Grennan also sang fiercely out into the hall with only one guitarist accompanying, somehow managing to get the whole crowd immersed in the performance as though he was playing with a full band.

A moment to remember of the evening, was when Kennedy brought all of the acts onto the stage to sing one final song together to honour the victims of the terrorist attack and ultimately to stand strong against terror and fear.

A Peaceful Noise puts on charity events all around London. Get to a show near you or check out their website.