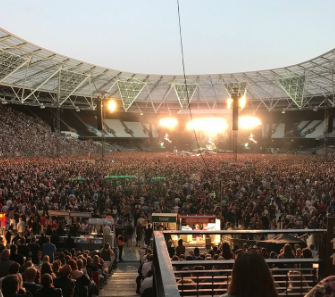 The Foo Fighters have been selling out shows worldwide for 24 years and are arguably one of the most influential hard rock bands in the world. With Dave Grohl being a paramount figure in the world of rock for the last three decades as part of two successful rock bands. As soon as we arrived at Stratford for the first of their two nights at London Stadium, all we could see were people of all ages covered in Nirvana and Foo Fighters memorabilia. With the majority of people having been teenagers at the peak of the band’s career back in the 90’s/00’s it was clear the dedication the fans had for this band was nothing short of phenomenal.

As the opening guitar riff of ‘All my Life’ burst through the stereos, 60,000 people jumped to their feet in order to get the first glimpse of a truly iconic band which would be playing for two and a half hours that night.  With Grohl’s signature light blue guitar darting from one side of the stage to the other, each person was in awe of his every movement knowing this was a rare moment to watch. In a world that is heavily dependent on the use of electronic alterations, it was refreshing to hear music in its authentic form. Throughout the set, they played a song from each one of their albums over the last two decades, alongside multiple covers including ‘Under Pressure’ by Queen where Dave went back to basics on the drums while Taylor executed the vocals. For me, the highlight came when the band began to play ‘Best of You’, which showed Grohl’s softer side whilst also showing off his wide vocal ability that is often drowned by the nature of the instruments behind him. It was an unforgettable moment as the entire stadium sang each line with the band as laser lights took over space above the crowd.

The true musicianship behind each of the six members was outstanding, particularly through the five-minute instrumental interludes within each song. The way they engage with the audience alongside the execution of each song is the reason why they are able to continue selling out stadiums two decades later. To me, the Foo Fighters are the true essence of hard rock. Although they are not as young as they used to be they still have so much energy and the charisma. There’s no doubt we will be seeing a lot more of this band for many years to come.