Festival Interview with Gently Tender at All Points East 2019 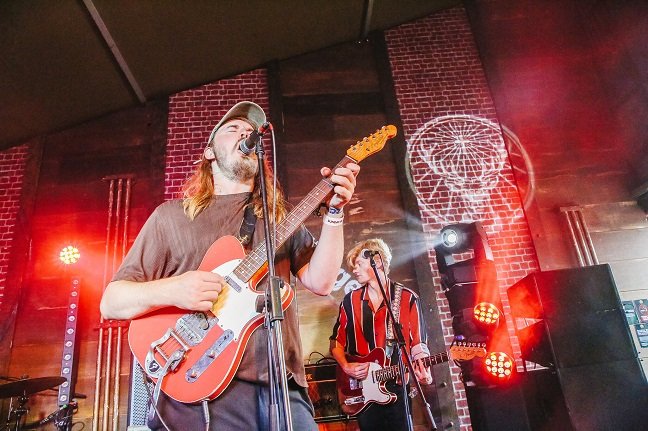 Gently Tender is a newly formed alternative folk/rock band which consists of three former Palma Violets alongside one member from the punk-pop band The Big Moon. On the final day of All Points East, ahead of their JagerHaus performance; I had the pleasure of interviewing frontman Sam Fryer to learn a little more about them and be given some wise words of his own.

What are you looking forward to most about playing the festival today?
Well.. playing a festival! It’s a beautiful summer day and it’s good that we’re playing earlier so we’re not clashing with any headliners and just to get hang out with friends really.

Tell me a bit about yourselves and how you came together as a band?
We had an old band called Palma Violets and then they split up so we carried on with a new sound and a new way and we got some friends in playing some keyboards and extra guitars to get the sound bigger and so formed Gently Tender. It’s been a pretty smooth ride so far and people come to the shows because they’re interested from the old band and the other guys have been in other bands as well.

What feels different about performing at All Points East compared to any other show?
The lack of mud.. normally there’s a lot more mud and it’s kinda like a desert today. Definitely a plus side. Everyone’s in T-Shirts and more up for it and we’re just ready to be listening to some music.

Who are you most excited to be on the same line-up as today?
I know Mac De Marco and Bon Iver are playing and I’ve never seen Bon Iver play. I was definitely a fan of that first album when it came out.

What do you want to put the spotlight on coming up?
We’re really close to finishing writing an album and hopefully release it early next year. We’ve got some great festivals lined up like Glastonbury and Latitude coming up. Reeperbahn in Hamburg, Germany in September.

Your favourite song to play live and why?
We’ve got some new songs we love but the latest single ‘Some Hard Advice’ encaptures what our band is about. It’s not about being too soppy but it’s also about taking hold of a feeling and being quite intense with the performance. It’s quite up-tempo but also deep. It’s where I want to be as a musician.

What would you be if you weren’t a musician?
Probably a professional cricketer. I always say this with tongue in cheek but cricket is my first love and music comes second. I’m a fastballer.

What are you listening to right now that everyone else should be?
Two American acts; one is called the Pleasure Routine that we played with last year and they made one of the greatest albums of the last three years. Also, Greg Ashley who it’s massively undervalued in the American scenes. He deserves all the credit that he doesn’t get.

From your song ‘Some Hard Advice’ you say you’re going to give wise words. What wise words can you give me?
Don’t be afraid to be yourself.