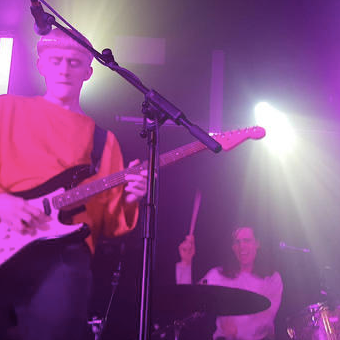 Earlier this year we spoke to hot new London band, Childcare, and earlier this month they were one of the many fantastic acts that performed at The CloseUp Festival held at Hoxton Square Bar and Kitchen in London.

Before they went on, I had a little chat with frontman Ed and he told me was excited to get on stage and play. “We are going to have fun,” were his exact words.

Fans were excited too with one person telling me how she had flown in from New York that morning to see the band.

We do like a good Childcare gig and they definitely did not disappoint. Our favourites were on the Main Stage at 8pm. They kicked off with ‘Film Club’ which is a punchy, guitar-filled track about going to the movies to be close to someone (“I go to see you”).

They then played one of their older songs, ‘Jumble’, which I haven’t actually seen being performed live before. ‘Jumble’ was loud. Not just in terms of volume but, like the band, in attitude too. It was a proper head-banger song and when I looked behind me (because I was at the front, naturally) I could see that everyone else was moving too.

As usual, Ed did not shy away from his frontman duties and made sure the crowd gave them the love they so well deserved. “Come on, that was a good song!” he told the audience, encouraging them to cheer more.

‘Omega Grey’ and ‘Dust’ from the ‘Made Simple’ EP were also played.

Then, band roles were swapped as Emma took the mic and Ed became the band’s bass player. Emma also sings under the name Saint Clair and has a gorgeous voice. I noticed her angelic vocals really worked with the punk-influenced music. This song was called ‘Bamboo’ and I couldn’t help but wish Emma would stay on as the lead singer a little longer (sorry Ed)!

Ed had to come back to centre stage, though, because who else could sing the lyrics to ‘Magazines,’ (“I’ll bet that you like pot pouri”)?

Childcare also played their new single ‘Big Man’. It has had a few plays on Radio 1 and Dan from Bastille played it as one of his picks when he was on Annie Mac’s show last week.

To finish, guitarist Rich asked the crowd if they wanted the “really good” song or the “really, really good” one? We were treated to the latter, ‘Put Down Your Pen’.

Afterwards, I spotted drummer Glyn in the bar and wanted to tell him how great the show had been. He mentioned that they were writing and recording new material and would be busy playing festivals over summer, before embarking on their ‘Luckyucker’ tour later in October.

I also spoke to Rich and he told me about the “technical nightmare” of having actual cows in their next music video, which is planned for release in June. I had to ask him about it because, when Ed had told me about the music video plans in the last interview, I was a little suspicious that he was pulling my leg.

The CloseUp festival was a great opportunity to discover new artists. The Childcare set was so, so much fun! Much like the neon ‘Childcare’ sign on stage, the energy was electric.

Childcare will be at Camden Rocks, June 2nd.
Luckyucker tour October 9 in Birmingham.