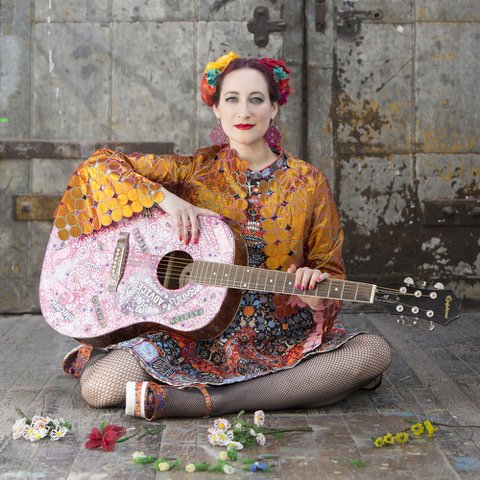 On May 16th we headed down to Bedford to see the enigmatic and charismatic Rachael Sage perform. The Bedford’s cosy interior had been lit up with a collection of hazy neon stage lights, resulting in a space that was as magical as it was intimate.

Seated at the piano for the majority of the performance, Sage was also accompanied by a reserved and yet prominent violinist who provided the perfect partner to Sage’s dulcet tones. Sage began the performance as she meant to go on, with a gutsy and upbeat rendition of ‘Heaven is a Grocery Clerk’. This first song gave the audience a taste of Sage’s charming lyricism and showed the depth of her vocal tone.

Up next was the title track from her most recent album ‘Myopia’. This was one of my favourite moments of the evening, and the track’s message of openheartedness and sincerity was not lost on the audience.

We were then treated to a musical change as Sage left the piano and picked up her guitar for an upbeat and enthusing performance of Alive. The song’s positive message and optimistic outlook for the future meant for a beguiling and exciting performance. Sage then continued to show the extent of her musical talent with an acapella version of ‘Haunted By Objects’ accompanied by rhythmic clapping and occasional violin moments.

The gig in its entirety perfectly showcased the width and breadth of Sage’s musical talents. She traversed different genres and themes at ease and took the audience on a true journey through her repertoire, it was truly a wonderful evening.